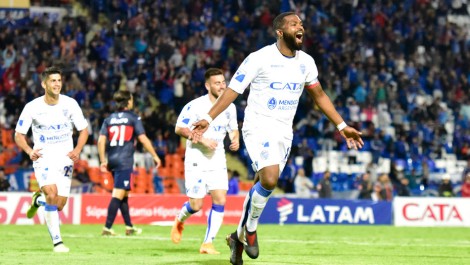 Another home win and another goal for Santiago Garcia. Godoy Cruz have been sensational, particularly in 2018, and Sunday evening’s win over Tigre in Mendoza ensured a best-ever second placed finish in the top flight.

Victorio Ramis being sent off midway through the first half for a challenge on Julio Chiarini could have threatened Godoy Cruz’s home record that has seen only one team leave with anything this season but even with ten men, El Tomba were too much.

Superliga top scorer Santiago Garcia needed just one chance to head Godoy Cruz in front to take his season tally to 17 and Ángel González tapped in a second ten minutes from time.

With a place in the Copa Libertadores secured, Godoy Cruz now need to try and keep the side together as much as possible before 2019.

Argentinos Juniors must wait to see if Colon get a win over Racing Club on Monday to discover if they have done enough for a place in the Copa Sudamericana but for Los Bichos and Vélez Sarsfield, it has been a positive 2018.

Mauro Zárate’s superb finish gave Vélez a 21st minute lead and with the on-loan striker hitting eight goals since his return the question is now whether Gabriel Heinze will be able to bring the forward in permanently.

Jonathan Sandoval headed Argentinos level just after the hour mark and that was enough for the point that looks likely to put Los Bichos in the Copa Sudamericana next year.

Los Bichos all but securing a spot and Vélez ending the season nine unbeaten, a terrific way to end the Superliga when both were in the relegation mix at the start of the campaign.