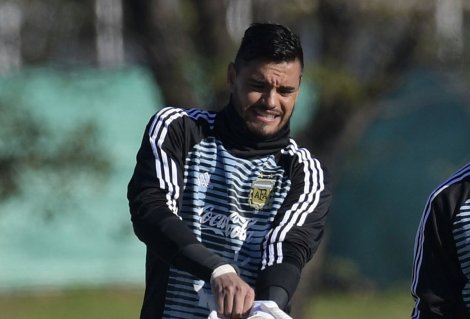 Argentina were stunned on Tuesday with the news that Sergio Romero had suffered a knee injury in training and was ruled out of the World Cup. The goalkeeper’s replacement Nahuel Guzmán has already joined the group in Ezeiza but Romero’s wife suggests not all is what it seems.

Discomfort in the Manchester United player’s right knee caused the medical team to investigate and swiftly issued a statement that detailed Romero had suffered a joint blockage in which requires surgery.

However, Romero’s wife, Eliana Guercio told Los Angeles de la Mañana: “There’s nothing broken. It’s a piece of loose cartilage. The doctors told him he was OK for the World Cup.

“The recovery is 2-3 weeks maximum but with how my husband is & the effort he puts in he could be ready for the first game (vs Iceland).”

Argentina have already had their fair share of injury concerns with Sergio Agüero returning to training after knee surgery and Lucas Biglia and Gabriel Mercado receiving treatment.

After being informed that Romero requires minor surgery, Jorge Sampaoli took no risks of taking another possible injury doubt to Russia but Guercio claims there is more to it.

“There are many people that want him out. They said it was broken to justify it. I’m tired of the lies. I don’t know if those that speak are inept, uninformed, cowardly or have some personal interest, which in all cases would be the worst reasons.”

There is no suggestion that this is the case and with Argentina’s World Cup opener against Iceland a little over three weeks away it would be a race for Romero to be fit and ready.

But it is heartbreaking for a player that has been so central to Argentina for the best part of the last decade and a blow to the team given the inexperience elsewhere in the squad.