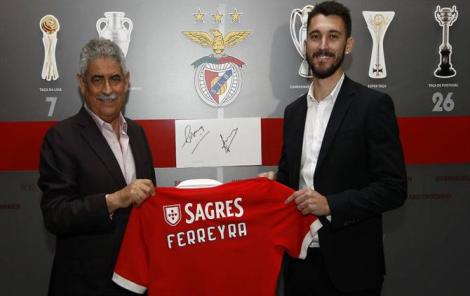 For a nation well used to shipping out talents yet to even leave their teenage years, it seems odd for the jury to still be out on Argentian striker Facundo Ferreyra. At 27 and fresh from a prolific campaign with Shakhtar Donetsk, Chucky has sealed a move to Benfica and with a hefty contract and the expectation that comes with the Portuguese giants, all eyes will be on the former Banfield wonderkid.

With 30 goals in 42 games last season, Ferreyra helped Shakhtar to a league and cup double.

Few strikers in Europe can boast of such numbers and yet due to the Argentinian playing in Ukraine and having spent an odd season on-loan at Newcastle United in 2014/15, where he didn’t play a single minute, many would question Ferreyra’s quality.

However, three goals and two assists from eight Champions League matches, as Shakhtar progressed ahead of Napoli from their group, before being eliminated by Roma in the last 16 suggested Ferreyra could yet cut it at the highest level.

Benfica certainly hope so despite not paying a transfer fee for the out of contract striker, the Águias have reportedly paid Ferreyra a €4m signing-on fee and handed him a four-year deal worth a sizeable €2.2 million per year.

“It’s a really big club! I’m glad to be here. In order to play I have to be physically and mentally well,” Ferreyra told the club’s official site.

“Wearing a Benfica shirt is a big responsibility. I really want to meet my teammates and start playing. For me, I would play tomorrow “

Benfica will be glad to sign Ferreyra off the back of such an outstanding campaign as Chucky’s career to date has been one finely balanced on confidence.

Emerging from Banfield’s academy, Ferreyra made his debut at 17 and scored once in his six appearances during that maiden campaign. Goals followed but at Argentina youth level there was also an apparent lack of ruthlessness at times. Banfield’s relegation saw Ferreyra move to Vélez Sarsfield in 2012 and after a slow start at his new club, Chucky eventually found his feet.

Two goals from the first 12 rounds of matches in the Torneo Inicial didn’t promise much but a hat-trick against Arsenal made way for a flood and as Vélez went on to lift the title, Ferreyra was the league’s top scorer with 13 from 22.

That form earned Ferreyra his move to Shakhtar for around $9 million but in Ukraine too, the young striker proved a slow starter.

Three league titles, three Ukrainian Super Cups and three Ukrainian Cups have been Ferreyra’s haul from five years (minus the one in Newcastle) in Ukraine but it has only been since returning from that dreadful loan spell that the striker has been anything like the player Shakhtar had truly hoped for.

Now Chucky must prove himself again and if he can continue such form, the profile of the Portuguese league and the Argentinian interest will certainly get him noticed.

A point not lost on Ferreyra: “It’s a huge Club! I have following Benfica since I was young because of all the Argentine footballers who played here. It’s a dream to be here where such great players have been.

“It is a very well known club in Argentina; several players played here: Di María, Aimar, Saviola … the Portuguese League is well followed due to the Argentinians that play here, and when they told me to about Benfica I did not hesitate.”

Ferreyra will not be alone and with Eduardo Salvio already in the Argentina World Cup squad, Chucky will still harbour aspirations of breaking in along with new teammates Franco Cervi and Germán Conti.

So what can Benfica expect? In Ferreyra’s own words: “A player who gives everything for the team, who will run, who will try to score goals and who will sacrifice for this shirt.”

And if he finds his touch, one who could prove to be a great success.