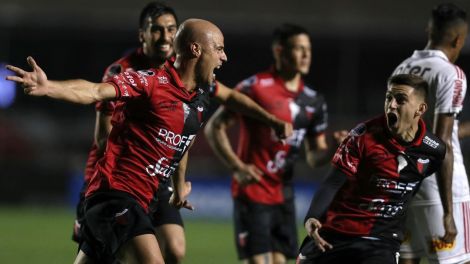 Some 5000 Colón supporters made the trip to São Paulo for their side’s Copa Sudamericana clash against the Brazilian giants and they were rewarded with a historic victory in the Estádio Cícero Pompeu de Toledo.

No Argentine side had won away against São Paulo in 30 attempts and Colón were not expected to buck that trend but Matías Fritzler’s goal ten minutes from time gives El Sabalero a terrific chance of progressing.

Both sides had missed clear opportunities in the first half but it was São Paulo who came closest to breaking the deadlock when Bruno Alves headed against the crossbar shortly after the hour mark.

With a decent goalless draw for Colón looking likely, Eduardo Domínguez snatched a win. The ball fell to Fritzler just outside the box and his fierce half-volley took a slight deflection, adding a loop to the shot that left goalkeeper Jean helpless.

São Paulo saw Brenner sent off late on for a retaliatory shove on Emanuel Olivera and Colón held on for the win.

A clean sheet and a one-goal advantage gives El Sabalero a real chance when they meet in Santa Fe in two weeks – a last 16 tie against Junior awaits the winner.