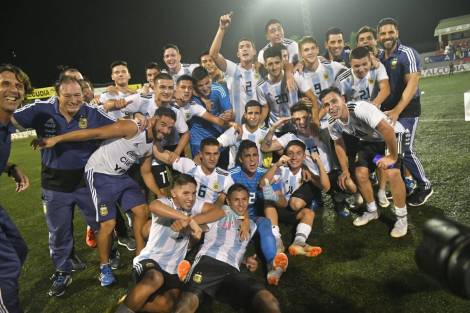 It’s only the COTIF tournament, the level of opposition wasn’t always the most taxing and Argentina didn’t even play that well for large parts but with the nation’s football in need of a boost, the Under-20s have provided that by lifting the trophy with a 2-1 win over Russia.

Once more Lionel Scaloni’s side were made to toil, just as they did in Monday’s semi final win over Uruguay. But while a penalty shootout was required against their neighbouring South American rivals, Rosario Central midfielder Alan Marinelli struck deep in extra-time to secure the title.

Russia, who had beaten Venezuela in the other semi final, were much the better side during the first half and led after eleven minutes when a free kick was swung into the box and headed past Jerónimo Pourtau by Igor Diveev.

It was the first time that Estudiantes goalkeeper Pourtau had conceded in the tournament but Argentina weren’t behind for long and it was owing to an error by his Russia counterpart.

Gonzalo Maroni’s looping free-kick was badly misjudged and when the ball came back off the crossbar, Facundo Colidio was first to react to tap the ball in.

Maroni had the clearest chance to win it in normal time but with neither side able to find a second, the game moved into an additional 20 minutes.

A minute into that period, Gennady Kiselev was sent off and with Argentina able to push forward the breakthrough finally came. Facundo Mura’s deep cross reached second half substitute Alan Marinelli and the Central youngster volleyed the winner.

Given the disruption and the limited time working with Scaloni and Pablo Aimar, Argentina deserve enormous praise and while Facundo Colidio being awarded as the tournament’s best player was generous, the entire group showed great spirit.

Far bigger tests will come for this squad and for Scaloni and Aimar those challenges will come very soon taking charge of the senior side but after so many set-backs, Argentina should enjoy this small success.