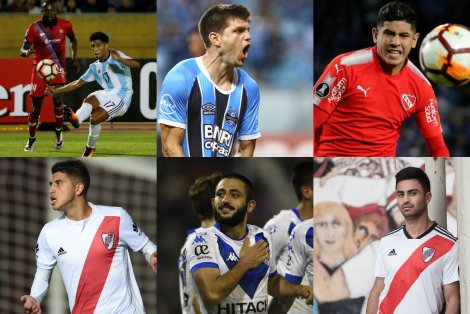 After a disastrous World Cup, Jorge Sampaoli’s departure and the AFA’s wait to name a permanent successor, September’s friendlies against Guatemala and Colombia are a bit of a free swing for caretaker Lionel Scaloni and his assistant Pablo Aimar.

Javier Mascherano and Lucas Biglia hung up their international boots, Lionel Messi asked for some time off and a host of other names from the generation of three consecutive final defeats have been left out. So Scaloni, just back from lifting the COTIF tournament in Spain has been able to name a youthful, experimental squad under relatively little pressure.

Only nine from Russia and veteran goalkeeper Sergio Romero, who missed out on the World Cup through injury, remain and additionally there are number of those players that were eventually overlooked by Sampaoli like Mauro Icardi, Leandro Paredes, Lautaro Martínez and Fabricio Bustos.

However, among the 29-man squad there are six South American-based players set for debuts who may be unfamiliar to many.

An overdue call-up for two-time Copa Libertadores winner Walter Kannemann, the powerful, no nonsense defender brings a wealth of South American experience and a strong winning mentality that has often been lacking in the Argentina squad in recent years.

Given the dearth of defensive options, La Albiceleste overlooking Kannemann until now is something of a surprise considering just how integral the 27-year-old has been to the success of Grêmio over the past two years. A Copa do Brasil, the 2017 Copa Libertadores and the subsequent Recopa Sudamericana obviously saw the likes of Barcelona midfielder Arthur and the talented Luan take the limelight but Kannemann has been a favourite with supporters.

Strong in the tackle and in the air despite being relatively short for a central defender, Kannemann’s relentless desire to win and battle for every ball has seen success follow his career. A San Lorenzo academy product, the youngster broke into Los Cuervos’ senior side in 2010 and helped the club firstly avoid relegation and then lift the 2013 Inicial before the historic Libertadores triumph.

Will Kannemann make the step up to international football? Time will tell but his ability on the ball and versatility to play at left-back makes him a potentially valuable member of a new look Argentina.

There is a good reason that Independiente got Alan Franco tied down a new deal last month with an increased release clause of $20 million as European clubs have already begun circling around the young defender.

Originally a defensive midfielder, Independiente snapped up the teenager from lower league Buenos Aires San Telmo in 2016 and it was here that Franco was converted to his current position. Few would have expected such a quick rise to one of Ariel Holan’s key first team players but after Nicolás Figal was hit with a doping suspension, Franco came into the side and has never looked back.

Dominant aerially and quick in the tackle, Franco is a reliable first pass out from the back in Holan’s attractive Independiente side and with the youngster in the back line it was no surprise to see El Rojo lift the Copa Sudamericana last year.

One for Argentina’s future, Alan Franco’s progression from youth player to international has been meteoric and while it might be a little too soon for the 21-year-old to be considered the heart of La Albiceleste’s defence right now, the experience of being included in Scaloni’s squad will only aid his development.

“I went into shock, I couldn’t believe it,” were the words of Leonel Di Plácido, echoing what many others were thinking, after learning that he was part of Scaloni’s squad for the September friendlies.

That is not to say that the Lanús full-back is not a talented player but the timing is perhaps odd given that since the 24-year-old moved to El Granate one year ago , Di Plácido hasn’t shown his full potential. Outstanding prior to the move with Atlético Tucumán, the All Boys academy product, played a large part in El Decano’s promotion back to the top flight and their remarkable path to Copa Libertadores qualification.

Underrated defensively, it is bombing down the right where Di Plácido’s talents really lie and when Lanús swooped it was assumed that the Atlético defender would be replacing one-time Argentina international José Luis Gómez. Both have struggled with injuries and form since then and maybe it is Atlético’s current right-back Leonardo Godoy most deserving of a place at this time.

Comparisions to Belgium and Chelsea star Eden Hazard might be a little strong but it is certainly fair to say that Matías Vargas has been one of the best players in Argentina during 2018 and with his quick feet, jinking runs and eye for a pass the similarities are there.

The Salta-born academy product made his Vélez debut back in 2015 and after a something of breakthrough season in 2016/17, it was during the last campaign where El Monito really stepped into the spotlight.

Operating off the left but drifting in behind the striker in his almost predatory role of creator, Vargas notched ten assists (second only to Cristian Pavón) and five goals in 25 appearances as the 21-year-old became one of the key players in Gabriel Heinze’s inexperienced yet talented Vélez side.

Now with Mauro Zárate gone the responsibility on Vargas’ young shoulders is even greater but another outstanding display earned Vélez victory on the opening weekend of this season.

Alejandro Sabella found a sense of balance in a system of organised chaos but since the 2014 World Cup campaign Argentina have struggled to find the ideal midfield. An abundance of number fives and number tens left little in between and so the link between defence and attack was often left severed. River Plate’s Exequiel Palacios may not be the answer, at least not right now, but the 19-year-old is certainly one of those with the attributes to help find that elusive equilibrium.

A superb passer of the ball with the energy to drive forward and support from deep, Palacios has quickly established himself as a key first team option for Marcelo Gallardo after playing only a supporting role last season. Starting both Superliga fixtures this season and trusted with a midfield role in the huge Copa Libertadores clash against Racing Club, the Argentina under-20 international is now ready to make another step up.

While Palacios’ rise may have been rapid, River teammate Gonzalo Martínez had to be a little more patient to win over supporters at El Monumental. However, Pity has been one of the best players in Argentina over the past 18 months and while no European club is yet to match River’s valuation of the attacking midfielder, there are few more deserving of an Argentina call in the Superliga.

When River paid Huracán in excess of $4 million for Martínez in 2015, Los Millonarios were buying one of the brightest prospects in Argentina but it’s fair to say that Pity didn’t win over the fans immediately. There were flashes of brilliance but his inconsistency and poor decision making looked as though it could prevent the youngster from ever realising his potential.

A finger over the lips goal celebration provoked supporters but soon after Martínez silenced his critics and hasn’t looked back. Quick and skilful Martínez can operate as a natural winger on the left but with his splendid left foot, the 25-year-old is equally dangerous cutting in off the right or posing a long range goal threat in behind the striker.

Links to Europe have been plentiful over the past year and if Pity could produce some of his magic in an Argentina shirt, River may find his $15 million release clause finally triggered.