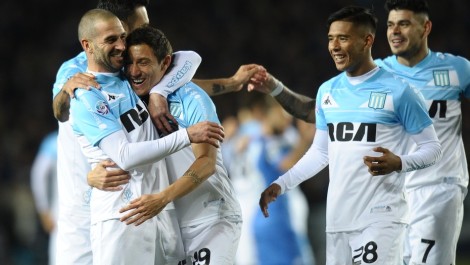 After throwing away their two-goal lead last week in Tucumán and the row that was created in the aftermath surrounding Ricardo Centurión it hasn’t been the easiest week for Racing Club but Eduardo Coudet’s side responded superbly to deservedly get the better of Vélez Sarsfield on Sunday evening.

Centurión returned to the Racing eleven and La Academia were too quick out of the blocks for Vélez as the Coudet’s quick countering side looked dangerous with almost every attack.

Only three minutes were on the clock when Gustavo Bou bulldozed his way through the middle, rolled the ball wide for Lisandro Lopez and saw the Racing’s captain’s deflected effort slip past Alexander Domínguez.

And in these opening stages Racing could have been further ahead such was their superiority over a young Vélez side that at times appeared a little shell-shocked.

However, for all their obvious attacking qualities Racing remain vulnerable and Vélez were able to gain a foothold. The talented Matías Vargas proved not to be such a threat but the visitors did come close to equalising during the second half when Gabriel Arias was forced into a good save at a corner before the ball was scrambled clear.

As Vélez pushed forward gaps appeared defensively and seven minutes from time substitute Pol Fernández was left clear to run through and roll the ball past a stranded Domínguez for his first Racing goal.

Jonathan Cristaldo saw a late effort ruled out for offside and Matías Zaracho missed a sitter as Racing made harder work of things than was necessary but it was an important three points for La Academia, who will only improve as the weeks pass.

Earlier in Bajo Flores, Lanús came from two-down to salvage a draw in an entertaining clash with San Lorenzo.

Last week it was San Lorenzo who battled back to earn a point while Lanús through away such a lead so in what has been a bizarre start to the Superliga the two sides switched roles in the Nuevo Gasómetro.

A replay of the final of the 2016 Transición, in which Lanús were crowned champions, shows just how far both sides have slipped in those two years but for all their flaws, it created an exciting game on Sunday afternoon.

The visitors’ almost non-existent defending saw Rubén Botta break the deadlock midway through the first when a simple punt up field released the midfielder through on goal for a simple finish past Guillermo Sara.

And while youngster Elías Pereyra deserves credit for his precisely threaded pass for San Lorenzo’s second the ease with which Nicolás Blandi found the space to tap in raises further eyebrows.

However, Lanús didn’t give in and before the break pulled a goal back. Nicolás Navarro failed to hold Jorge Pereyra Díaz’s shot and the spilled ball fell to Sebastián Ribas for the Uruguayan to pounce on the rebound.

As the rain fell it took only a couple of minutes after the restart for Lanús to level as Nicolás Thaller headed in from a free kick but despite both sides flowing forward the goals dried up.

Gastón Lodico volleyed against the post late on when the youngster probably should have scored but in truth a share of the points was probably a fair result.