The new Superliga season is now two weeks in and if you missed any of the highlights over the weekend, here is a quick recap of all the fixtures from Round Two and all the goals…

Undoubtedly the result of the round was in Quilmes where Estudiantes shocked Boca Juniors and meant that for the first time since December 11th 2016, Guillermo Barros Schelotto’s side wouldn’t be top of the table.

Boca may wish to point to their exploits in Barcelona during the week but the truth was a dismal performance was deservedly punished by Leandro Benítez’s talented young side. Fabián Noguera headed El Pincha in front before 18-year-old Matías Pellegrini capped off the win.

Boca’s away form has been troubling for a while and this slip meant Edgardo Bauza’s side stole top spot as the only club still with a 100% record. El Canalla nicked a second consecutive win thanks to Fernando Zampedri’s header away to Talleres.

Racing Club bounced back from a difficult week which saw La Academia through away a two-goal lead against Atlético Tucumán and Ricardo Centurión land himself in a spot of bother (again) to see off Vélez in the Cilindro. Lisandro López and Pol Fernández maintain Racing’s unbeaten start.

Local rivals Independiente began their campaign a week later due to their Suruga Bank victory and twice allowed Newell’s Old Boys to come back and claim a point in Rosario.

While River Plate were held to another goalless draw due in part to a superb goalkeeping performance by Belgrano’s César Rigamonti. Franco Armani set a new league record for not conceding but River’s lack of bite at the other end will be Marcelo Gallardo’s concern at present.

Elsewhere San Lorenzo threw away a two-goal lead to draw with Lanús, Colón came from behind twice to tie with Tigre by the same scoreline and newly promoted Aldosivi claimed a first win back in the top flight after a late Matías Pisano winner against Huracán. 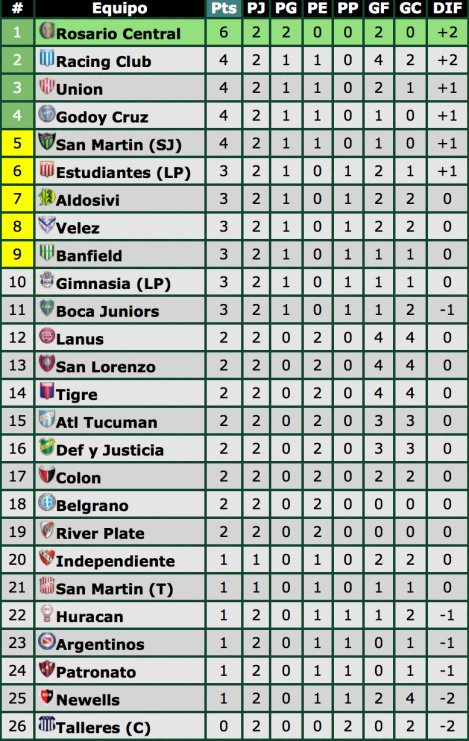