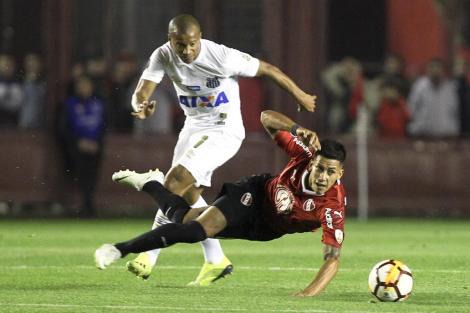 It was far from the spectacle that a clash of two South American giants promised but all of Santos’ hard work in preserving a goalless draw in Avellaneda looks like it could be undone by the Brazilians fielding an ineligible player.

Independiente were much the better side in the Copa Libertadores last 16 first leg against Santos, a club with which they share a great history in the continent’s biggest tournament, but were unable to make their superiority count in what was a scrappy encounter.

However, just as the Brazilians were celebrating a job done ahead of next week’s second leg in São Paulo, it was reported that midfielder Carlos Sánchez should have been suspended.

The recent signing from Liga MX club Monterrey was sent off for River Plate in 2015 shortly before leaving for Mexico and given a three-match suspension in CONMEBOL competitions. A 2016 amnesty saw this reduced but with one match still outstanding when Sánchez returned to the CONMEBOL region this is still in effect.

Independiente will likely be filing this to CONMEBOL shortly and just like San Lorenzo were in this year’s Copa Sudamericana or Lanús in the last Copa Libertadores, a 3-0 victory could well be awarded.

While El Rojo were probably deserving of victory in Avellaneda, a 3-0 scoreline would make Ariel Holan’s side overwhelming favourites to progress to the quarter finals.

Without first choice centre back pairing Alan Franco and Nicolás Figal through suspension and with Juan Sánchez Miño, Martín Benítez and Silvio Romero all injured, Independiente were without key names in the starting eleven but were still dominant against a Santos side content to play on the counter.

That counter produced a grand total of zero shots on goal over the 90 minutes and although Independiente managed 14, goalkeeper Vanderlei was equal to anything thrown at him.

Guillermo Burdisso headed narrowly wide, Maxi Meza tested the keeper from range but there was nothing really clear until the 70th minute when Emmanuel Gigliotti blazed over the crossbar from a few yards out.

Santos were reduced to ten men, eight minutes from time when defender Dodô received a second yellow card for a foul on Pablo Hernández but the visitors were able to hold on.All eyes are now on CONMEBOL ahead of next Tuesday’s second leg. Is the tie in the balance at 0-0 or will Independiente be travelling with that three-goal cushion?