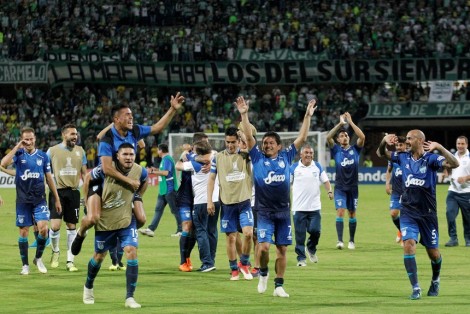 Argentina was seconds away from having a clean sweep in the Copa Libertadores on Tuesday evening but while Atlético Tucumán and Independiente both celebrated passage to the quarter finals, a last minute goal forced Estudiantes into what proved to be an agonising penalty shootout.

Atlético Tucumán’s presence in the Copa Libertadores at all has been a reason to celebrate for the club but qualification from the group stage and now victory over Atlético Nacional, El Decano are in the quarter finals.

Two years ago, the relative minnows from Argentina hadn’t played a competitive international match while their opponents on Tuesday in Medellín were lifting the Copa Libertadores for the second time in their history.

Despite losing 2-0 in Tucumán, Atlético Nacional were still fancied by most to overturn the result and book their place in the next round and that only increased when Omar Duarte opened the scoring after only eleven minutes of the second leg.

Understandably the home side dominated large parts of the game and a couple of superb stops by veteran goalkeeper Cristian Lucchetti kept them at bay but that isn’t to say Atlético Tucumán didn’t have chances. Leandro Díaz guilty of missing a one-on-one and the subsequent rebound could have eased the tension but ultimately it didn’t matter.

Ricardo Zielinski deserves enormous credit for taking this side to the quarter finals and the question now is just how far they can go. One thing is certain, no sides will get an easy ride in the Estadio Monumental José Fierro.

Atlético Tucumán’s opponents in the next round will be defending champions Grêmio but were it not for Alisson’s header deep into injury time, it would have been Estudiantes in another all-Argentinian quarter final.

Leandro Benítez has transformed Estudiantes in his short time in charge and after their first leg victory in Quilmes, El Pincha needed to try and hold that advantage in the formidable Arena do Grêmio.

That looked unlikely when Éverton finished off an outstanding passage of play within five minutes, flicking the ball over Mariano Andújar into the net. However, Estudiantes immediately struck back with youngster Lucas Rodríguez stealing in behind to slot the visitors level on the night.

Grêmio needed another just to force penalties and that didn’t look like coming as chances came and went, either wasted or denied by Andújar as Estudiantes held on.

The game was already deep into injury when Luan’s free-kick from the left found the head of substitute Alisson and it skipped past Andújar off the underside of the crossbar.

With the tie decided on the penalty spot, the champions were perfect. Gastón Campi skying Estudiantes’ second meant that André rolling in the fifth kept Grêmio’s hopes of defending their crown alive.

So with Grêmio denying one Argentinian quarter-final, Independiente await to discover whether they will face River Plate or local rivals Racing Club after Ariel Holan’s side secured their place in controversial circumstances against Santos.

Only hours before kickoff CONMEBOL confirmed that last week’s goalless first leg was now a 3-0 win for Independiente due to Santos fielding the ineligible Carlos Sánchez and it meant the atmosphere in the Pacaembu was tense.

Santos hadn’t given up belief and flew out of the blocks at Independiente but the Brazilians still struggled to convert their promising positions into shots on Martín Campaña’s goal.

Independiente content to play on the counter actually had the clearer chances and should have killed the tie in the opening 45 minutes with Maxi Meza seeing a late penalty saved by Vanderlei.

The second half followed that same pattern and once more El Rojo should have scored, Pablo Hernández hitting the underside of the crossbar and seeing the ball bounce just the wrong side of the line.

However, with ten minutes remaining and Santos no closer to reducing the deficit supporters had seen enough. Flares and firecrackers began to rain down and so when referee Julio Bascuñán called a halt, fighting in the stands with police only seemed to intensify.

The officials and Independiente swiftly departed with their job done and while Santos’ players remained on the pitch amid chaotic scenes it was a sad end to a Copa Libertadores tie between two of the continent’s most historic clubs.

Santos manager Cuca admitted that Independiente had been the better side regardless and deserved their place but fired a shot at the club’s hierarchy. CONMEBOL’s complete lack of organisation has sadly left a stain on the tournament.