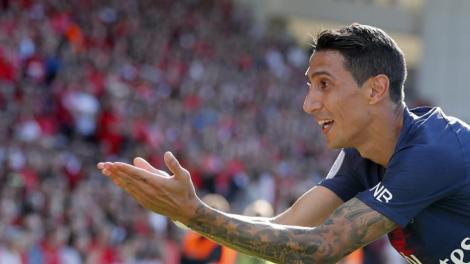 Paris Saint-Germain continued their perfect start to the Ligue 1 season with a 4-2 win away to Nimes and while the performance was far from perfect, Ángel Di María maintained his terrific early form under Thomas Tuchel.

Neymar had already given PSG the lead and further irritated the home support by mimicking crying next to a banner dubbing the Brazilian a crybaby but it was Di María who added a superb second.

Spotting the goalkeeper off his line, El Fideo whipped in his corner from the right and managed to score an inch-perfect olímpico to double the lead.

It was Di María’s first league goal to go with three assists in the four matches so far that have pushed PSG to offer a new deal to the 30-year-deal with only a year left on his current contract.

Direct from a corner!

Elsewhere in Ligue 1, Nantes earned their first win of the season with a 3-2 victory in Strasbourg.

Emiliano Sala headed the decisive third during the second half and it took the centre forward’s tally to three for the campaign already.

On Friday evening in the San Siro, Federico Fazio was on target for Roma but couldn’t prevent his side slipping to a dramatic last minute defeat to AC Milan.

Franck Kessie had put Milan ahead tapping in Ricardo Rodríguez’s low cross during the first half but Fazio volleyed an equaliser on the hour mark to set up an exciting finale.

Gonzalo Higuaín had a goal ruled out by the video assistant referee but played a vital role in Milan’s stoppage time winner. The Argentinian centre forward slipped a clever pass through for substitute Patrick Cutrone and the youngster slotted past Robin Olsen.

There was less good news in Spain as Santiago Cáseres’ smooth smart for Villarreal took an unfortunate turn with the 21-year-old leaving the pitch in the defeat to Girona in tears.

It had been another accomplished midfield display from the Vélez Sarsfield academy product but knee ligament damage, which will rule Cáseres out for at least a couple of months is an early set-back to his career in Spain.

On Saturday, Atlético Madrid were hoping to make up ground in the LaLiga table but Diego Simeone’s side were undone by Cholo’s old friend Antonio Mohamed.

El Turco looks to be a great addition to the league and his Celta Vigo side were deserved winners on Saturday. After a goalless first half a Diego Godín slip allowed Maxi Gómez to slot Celta ahead and soon after Iago Aspas doubled the lead.

It could have been worse but for Gustavo Cabral’s goal being ruled out after a VAR review but Atlético never really looked like getting back in it.

And finally in China, Ezequiel Lavezzi tucked away his ninth goal of the season as Hebei China Fortune picked up a 1-1 draw against Shanghai SIPG.

Wu Lei had headed the visitors in front but Lavezzi was tripped just before the break and got up to slot in from the spot.