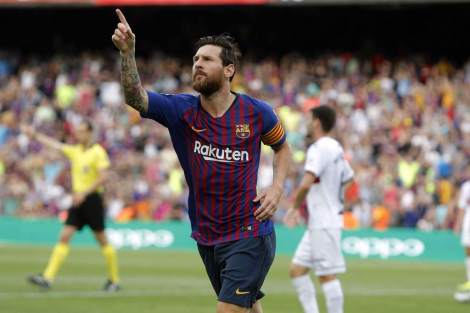 FIFA may inexplicably have left Lionel Messi off the podium for this year’s Best Men’s player but the European golden shoe winner last season continued about his business on Sunday with a brace in Barcelona’s 8-2 win over Huesca.

The scoreline is perhaps harsh on the newly promoted minnows who led at the Camp Nou and for large parts of the game were within touch but for Barcelona it was an emphatic way to maintain a perfect start of the season.

Cucho Hernández had given Huesca a shock third minute lead but Messi danced his way through the defence to equalise after quarter of an hour.

Messi = Not in the Top 3 🤔 pic.twitter.com/UvF1zIWZMK

An own-goal and another by Luis Suárez put Barcelona in charge but Huesca remained a threat and pulled one back through Alex Gallar.

If the first 45 minutes was a keenly contested game, Barça simply swept aside Huesca after the break. Messi crashed a shot against the crossbar before Ousmane Dembele made it four and with Huesca on the ropes, Ivan Rakitic volleyed in number five from Messi’c delicate scooped pass.

Messi darted in behind to roll in a sixth, set up the next for Jordi Alba and could have completed his hat-trick from the penalty spot but instead allowed Luis Suárez to complete the rout.

FIFA may not think so but there is still no better player in the world than Lionel Messi.

Messi won’t of course be in action for Argentina this week but one of those who was supposed to remain from the World Cup squad was Eduardo Salvio. The Benfica wide-man was in action this weekend and while Salvio got himself on the scoresheet, an ankle injury has forced him out of international duty.

Benfica remain top of the Portuguese league after a 4-0 win over Nacional in Madeira and Salvio was instrumental prior to the injury that forced him off late on.

The former Lanús winger created the opening goal for Haris Seferović and headed in the second before the stroke of half time but will miss Argentina’s friendlies in the United States.

One of the somewhat forgotten names in Argentine youth football, Walter Benítez produced a memorable performance in Ligue 1 helping Nice to a 1-0 win over Lyon.

The 25-year-old goalkeeper was once tipped for great things when breaking into the Quilmes side back in 2011 and Benítez rolled back the years with a tremendous display to keep Lyon out.

With nine saves, the former Under-20 keeper was named in L’Equipe’s and WhoScored’s Ligue 1 Team of the week.

L’Equipe’s Ligue 1 team of the week from the 4th round of matches. Presnel Kimpembe is PSG’s sole representative. pic.twitter.com/rsRphX5VA3

Another week in Major League Soccer (MLS) and as the playoffs quickly approach Luciano Acosta was once more in the headlines.

The pint-sized forward has struck up a formidable partnership with Wayne Rooney and the pair downed Gerardo Martino’s Atlanta United on Sunday.

Rooney’s header released Acosta for the opening goal and although Atlanta equalised, the former England international restored the lead from the spot before once more setting up Acosta for a third. The 24-year-old had plenty to do in both cases but finished superbly taking his season tally to seven goals and nine assists.

Lucho Acosta gets his second on the night. It’s 3-1! #DCvATL https://t.co/zfUdY2pgRO

Ignacio Piatti made it 13 goals in the MLS this season with the third in Montreal Impact’s 3-0 win over New York Red Bulls.

A thoroughly dominant display was capped by the captain when he pounced on a spilled shot to round the goalkeeper and slam the ball into the net.

Meanwhile in Liga MX, Cruz Azul maintained their unbeaten run at the top of the table thanks to a 4-1 win over Veracruz.

Iván Marcone is proving every bit the bargain that most in Argentina suspected he would at the base of the Cruz Azul midfield but the former Lanús number five wasn’t alone. Milton Caraglio nodded in the third before midfielder Walter Montoya came off the bench to see out the result.

And finally, Julio Furch gave Santos Laguna an early lead against Toluca but Enrique Triverio chalked up an assist in the home side’s equaliser before Rubens Sambueza rolled in the winner from the penalty spot.