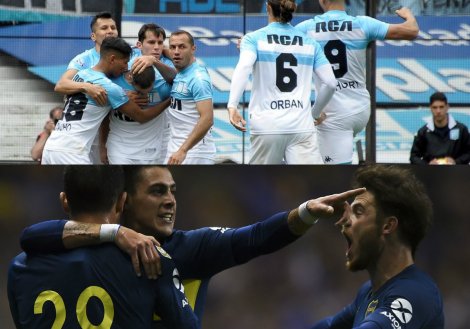 Four rounds into the new Superliga season and if you missed any of the highlights over the weekend, here is a quick recap of all the results and all the goals…

After a difficult week that saw Racing Club crash out of the Copa Libertadores, Eduardo Coudet’s side responded well early on Sunday in their top of the table clash with Rosario Central in Avellaneda.

Second half goals from captain Lisandro López and Augusto Solari gave La Academia a thoroughly deserved win and inflicted a first defeat on Edgardo Bauza since his Central return.

Atlético Tucumán are just two points off the pace after another late goal handed El Decano victory over a Newell’s Old Boys side sliding down the table but it was Boca Juniors’ win that reminded Racing and the rest of the Superliga who the title favourites still are.

In Guillermo Barros Schelotto’s 100th game in charge, goals by Cristian Pavón, Edwin Cardona and Sebastián Villa wrapped up a comfortable 3-0 win over Vélez Sarsfield and after taking only a point from the two matches prior, the defending champions are three points behind Racing.

River Plate meanwhile were unable to break their run of draws despite celebrating a Copa Libertadores last 16 victory in midweek. Nicolás Blandi ended Franco Armani’s 965-minute run without conceding and in the process cancelled out Juan Fernando Quintero’s fine opener to give San Lorenzo another draw too – both sides still undefeated but also yet to win.

And another side also waiting for a first win of the season is Independiente. El Rojo have played a game less but needed to come from two-down to claim a point against Estudiantes in Quilmes in a game that saw referee Ariel Penal draw heavy criticism.

Banfield edged out Patronato to go fifth, Godoy Cruz lost ground after a first defeat of the campaign against Talleres and Tigre continued their fine start with a 2-0 win against Aldosivi.

Tigre remain in serious relegation danger but that three points against a direct rival along with Patronato losing, San Martín de Tucumán sharing points with Gimnasia, San Martín de San Juan suffering defeat to Huracán and Belgrano drawing with Defensa y Justicia meant that El Matador were the big winners at the foot of the Promiedo this weekend.