Six rounds into the new Superliga season and if you missed any of the highlights over the weekend, here is a quick recap of all the results and all the goals…

There was no escaping the weekend’s biggest game as all eyes converged on La Bombonera for the latest Superclásico between Boca Juniors and River Plate. While both sides have eyes on the Copa Libertadores semi finals, champions Boca had already lost once this season and River Plate had only picked up their first league win last weekend following four draws.

The overall quality on the pitch as it typically does on such occasion failed to live up to the electric atmosphere but the same cannot be said of the game’s two goals. Gonzalo Martínez’s sweetly struck volley and Ignacio Scocco’s venomous piledriver gave River a two-nil win over their fierce rivals, who at this point look well short of a side hoping to lift the Libertadores and defend their league title.

River climbed to fifth with the win but everyone is now chasing Racing Club after La Academia chalked up a fifth straight win. Augusto Solari’s header gave Eduardo Coudet’s title hopefuls a 1-0 win over Unión in Avellaneda.

Their closest rivals as it stands are Atlético Tucumán after a 3-1 win over San Martín in San Juan. 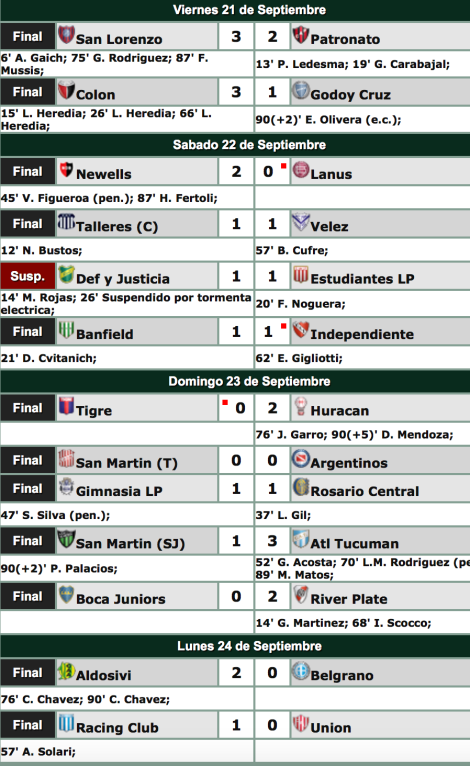 Independiente once more had to settle for a point, not helped by Pablo Fernández’s tenth minute red card, as Emmanuel Gigliotti earned a draw in Banfield while San Lorenzo came from behind to snatch a dramatic late win over Patronato thanks to Franco Mussis’ long range effort.

Those results in addition to San Martín de Tucumán failing to beat Argentinos Juniors and Tigre losing to Huracán have left the relegation battle looking all too predictable.

Belgrano’s defeat to Aldosivi on Monday leaves El Pirata in a precarious position, Newell’s piled more pressure on Lanús with victory in Rosario and Vélez earned a point away to Talleres but at least for this season, the current bottom four in the promedio table look to keep everyone safe.