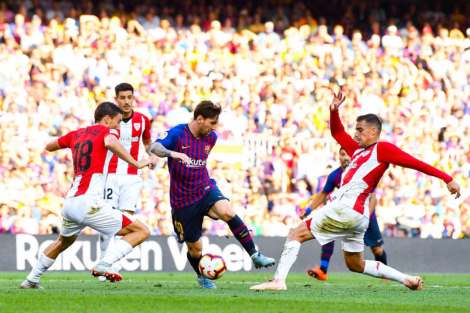 After a strong showing during the weekday games, Argentinians had their shares of ups and downs on the weekend. Lionel Messi started on the bench for FC Barcelona’s 1-1 tie against Athletic Club, Pablo Zabaleta made the starting XI in West Ham United’s win over Manchester United, and Lautaro Martínez made his first Seria A start for Inter Milan.

The Saturday slate of games kicked off with West Ham United taking on Manchester United at the London Stadium. The Hammers were off to a hot start with a well struck ball from Pablo Zabaleta into the box that was finished off by Felipe Anderson in the 5th minute.

A former Albiceleste regular, Zabaleta had a solid game with the assist, three successful tackles and 83% of passes completed. West Ham stunned Jose Mourinho’s side 3-1 to increase their unbeaten streak to four matches.

GOALLL!!!! What a start! Brilliant play by Noble and Zabaleta and finished off with a class back heel from Anderson! #WHUMUN #COYI pic.twitter.com/QdKTuQQ6vu

Elsewhere in the Premier League, Paulo Gazzaniga made his third consecutive start for Tottenham Hotspur as they faced Huddersfield Town. Gazzaniga had a strong outing as he held a clean sheet and made five saves on the day. Spurs were able to get all three points with a 2-0 win and given Argentina’s goalkeeping situation Gazzaniga may well play himself into contention soon.

In Manchester, Sergio Agüero’s darting run and cheeky series of passes with Raheem Sterling saw the former Independiente forward finish inside the box to score his fifth goal of the season and seal a 2-0 win for Manchester City over Brighton. The 30-year-old hasn’t been included in either of Lionel Scaloni’s Argentina squads but has started the season in tremendous fashion and following his knee surgery at the end of the last campaign is showing glimpses of the old Kun.

[GIF From all football app] pic.twitter.com/VnPPyXVeNK

In Italy, the day started off with Roma taking on city rivals Lazio at the Stadio Olimpico. Argentinian midfielder Javier Pastore and defender Federico Fazio made the starting XI for Roma. Pastore’s day was cut short as he was subbed out in the first half due to an injury.

Fazio had a solid day scoring the third goal for Roma to seal the 3-1 win, while also making eight clearances, two successful tackles and 88% passes completed.

At San Siro, youngster Lautaro Martínez made his first Serie A start as Mauro Icardi was on the bench against Cagliari. Martínez was one of the marquee signings of the summer window for Inter and the striker showed promise in the preseason fixtures.

The 21-year-old had a dream start scoring the game’s opening goal in the 12th minute of the match. He finished the match with two shots on goal and two key passes on top of the game winning goal as Inter won 2-0.

In Spain, FC Barcelona continued their recent struggles. The Catalan giants faced Athletic Club at the Camp Nou on Saturday. Manager Ernesto Valverde chose to start the match of with Lionel Messi on the bench and when Bilbao went one-up just before the end of the first half the manager was forced to make some changes.

Messi came into the game in the 55th minute for Arturo Vidal. Messi made his presence known, in his time on the pitch he completed 90% of his passes, had five shots, hit the woodwork once and created the game-tying goal for Munir El Haddadi in the 84th minute, salvaging a point for Barcelona.

Sevilla followed up their dominant performance against Real Madrid with a 3-1 victory over Eibar. Ever Banega had a strong outing opening his scoring campaign for the season.

Banega converted from the penalty spot for his first goal and finished off a Muriel ball in stoppage time to seal the game. But it wasn’t only the 30-year-old’s brace that made the difference, the midfielder finished the game with eight ball recoveries and three clearances.

In the Eredivisie, Nicolás Tagliafico continued his stellar season for Ajax as they captured three points with a 2-0 victory over Sittard. Tagliafico finished the match with 85% pass success, 11 ball recoveries and three successful tackles.

While in Greece, Ezequiel Ponce scored a goal in the 65th minute to help AEK Athens beat OFI Crete. The goal was Ponce’s third goal in five matches this season.

Across the pond in North America, Argentinians were scoring goals by the bunches in Liga MX and Major League Soccer. Leonardo Ulloa continues to perform in Liga MX after his move from the Premier League. The striker opened the scoring with a headed goal in the eighth minute to help Pachuca beat Cruz Azul 3-1.

Julio Furch scored the game winning goal for Santos Laguna in the 24th minute as they beat Necaxa 1-0.

In the late game, Monterrey took on Tijuana during a downpour. A pair or Argentinians scored goals in the game, Rogelio Funes Mori opened the scoring in the 11th minute with a left footed strike to the far post and Nicolás Sánchez converted a kick from the penalty spot in the 57th to help Monterrey to their 3-0 victory.

In Major League Soccer, Luciano Acosta’s rich vein of form continued for DC United. Acosta opened the scoring off an assist from fellow Argentinian Yamil Asad and the tiny playmaker was not done after the goal as he finished the game with three assists (two to Arriola and one to Rooney). DC United finished the game with a 5-0 win over Montreal Impact.

In Houston, the game looked out of reach for the home side as San Jose Earthquakes took a two-goal half time lead. Argentinian midfielder Tomás Martínez stepped up in the second half, the playmaker sent a pacey through ball to Mauro Manotas who finished it to put Houston back within a goal.

15 minutes later Martínez finished off a bouncing ball off of a corner, putting it in between the defender and the post to tie up the match. Houston ended up tying the game in the 87th minute to win the match 3-2.

On Sunday, the day started in Italy with a match up between Bologna and Udinese. Rodrigo De Paul who recently got his first call up for the Albiceleste linked up with his fellow countryman Ignacio Pussetto in the 32nd minute for the game’s and Pussetto’s first goal. Despite their efforts, Bologna went on to beat Udinese 2-1.

In another Serie A match up, Fiorentina beat Atalanta 2-0. Argentinian defender, Germán Pezzella captained Fiorentina and helped lead the side to a clean sheet. Pezzella finished the game with two tackles, four ball recoveries and nine clearances.

In La Liga, Argentinian Leonardo Suárez scored a goal for Real Valladolid in their clash with Villareal. The 22-year-old’s effort, against his former club, was the only goal if the game and handed the newly promoted side their second win of the season.

The weekend of matches ended for Argentinians in Liga MX on Sunday night. Argentinian striker Leonardo Ramos scored two goals for Lobos BUAP as they beat Monarcas 3 to 1.