The Golazo Team & Goal of the week is back. Despite three postponements, Round Seven is done and dusted and here is what stood out.

With ten matches to choose from here are the eleven that impressed from round seven, along with our Player of the round and pick of the goals. All stats come courtesy of WhoScored.com, who also provide previews and live in-play match stats for all Superliga matches. Feel free to disagree and leave a comment suggesting who you thought should have made it…

There is no question that Independiente were well below their best but Augusto Batalla still needed to be on fine form to earn Tigre a point in Avellaneda. A penalty stop denied Gonzalo Verón and soon after a strong right hand stopped a point-blank Gonzalo Asis header to ensure a clean sheet.

The forgotten man, Gino Peruzzi came in from the cold for Boca’s match against Colón and the 26-year-old served a timely reminder that he remains a decent option at right-back. Five tackles and five interceptions, Peruzzi was solid defensively and as ever looked to provide width on the overlap.

It was with good reason that Huracán were so keen to make Saúl Salcedo’s move permanent during the last transfer window and the Paraguayan is already repaying that faith. Outstanding in the air for a relatively small central defender, Salcedo had 100% tackle success as El Globo picked up three points in Córdoba.

An uncharacteristic slip that almost allowed Godoy Cruz to score aside, Alexander Barboza was in terrific form during Defensa y Justicia’s victory in Mendoza. The dominant centre back made 11 clearances and won possession five times to keep the home side out. 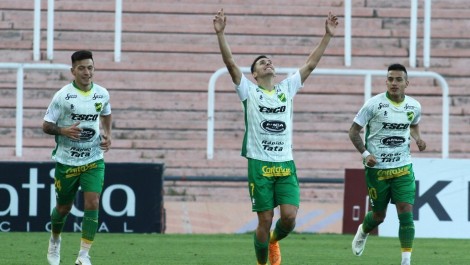 Strictly speaking Gastón Togni wasn’t playing at full-back but the 21-year-old has shown the versatility to play as a wing-back in the past and was outstanding down the left as Defensa y Justicia picked up a 1-0 win away to Godoy Cruz. Togni scored the only goal and was full of energy, winning possession four times and bursting forward to support the attack.

What a signing Marcelo Díaz is proving to be for Racing Club. The Chilean international dominated proceedings in La Paternal on Saturday as La Academia picked up another victory at the top of the league. Winning possession six times, Chelo posted a staggering 97% pass accuracy as the veteran controlled the midfield single-handedly.

It is easy to overlook the work that Nicolás Domínguez does in the Vélez midfield but the 20-year-old continues to provide a platform for the likes of Matías Vargas and Lucas Robertone to perform. Domínguez made seven tackles in the win over Aldosivi and was outstanding in winning possession and efficiently moving play forward.

It hasn’t been easy for Nicolás de la Cruz after arriving at River Plate as one of the most promising youngsters in South America. Many supporters were beginning to wonder what all the fuss was about but the 21-year-old excelled against Lanús and will hopefully use that as a springboard. A goal and an assist were just reward for a strong performance.

It was Andrés Roa’s blistering strike that gave Huracán victory over Belgrano and the Colombian was a constant threat in Córdoba. On loan from Deportivo Cali, Roa looks a great addition for El Globo with his pace and willingness to attack defences.

Lionel Scaloni has opted not to call Matías Vargas for his Argentina squad this month but that didn’t stop the 21-year-old producing a match-winning display for Vélez on Monday. Vargas scored a superb goal to break the deadlock but with four completed dribbles and four key passes, El Monito was at his tricky best throughout.

Marcelo Gallardo certainly has a nice headache ahead of River’s Copa Libertadores tie against Independiente with Nacho Scocco in such fine form that it’s difficult to put him below Lucas Pratto and Rafael Santos Borré in the pecking order. Scocco scored again as River thrashed Lanús on Friday and looks likely to find the net in every start at present.