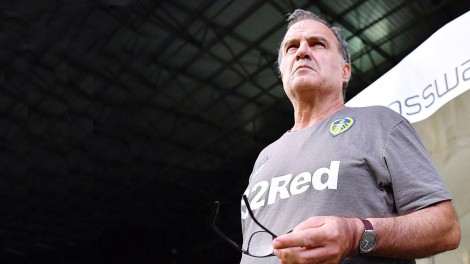 It’s been very difficult not to be impressed by the manner in which Marcelo Bielsa’s Leeds United have started the season and after telling Golazo back in June what to expect, self-confessed Bielsista and tactics guru Daniel Fraiz-Martinez returns with a breakdown of some key components…

On the back of renewed coverage in recent Leeds games. Especially those vs. Birmingham, and Hull, focusing on the return of Marcelo Bielsa’s favored 3-3-1-3 now seemed as good a moment as any to revisit.

Specifically from an attacking perspective, these contests actually presented a good opportunity to extract illustrations in how (this) shape primarily emphasizes both the rotation and width El Loco feels is needed to penetrate the opposing lines. However, more significantly, said games provide an insightful window into looking at the importance of ‘third’ and the ‘fourth man run’ aspect to the style of play… Not to mention the difference between the two concepts.

Versus Hull in particular as a result of the change in the opposition’s formation, Leeds at times did adopt the now fabled 3-3-1-3, to quite glaring effect [see photo below] 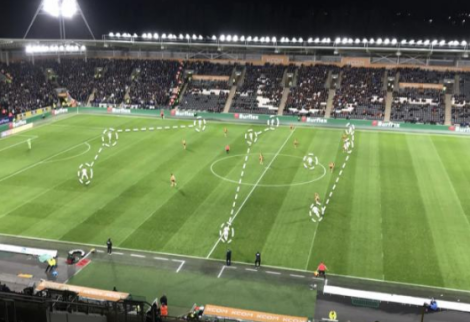 On many occasions now over the last few years, Bielsa has spoken candidly around his predilection for the 3-3-1-3 approach as for one thing it offers the most symmetrical route to link players in attacking pairings of ‘2, 2 & 2’. Whilst continuing to enable his team to stretch the pitch as wide as possible in doing so.

Truth be told the relevance of the shape can frequently be a tad overstated in this sense, as the priority is generally in respect to the former locational aspects, above say fixed positions.

If employed correctly though, EG: No players should be at the exact level. Nor should they be in a direct vertical line each other, then the right shape does not only enhance the interchange of said double-act(s) to surprise the opponent. But more importantly it also means that the players tasked with linking the different lines of play can also help the team create the triangles and diamonds on the pitch, that allow the rotation and interchange to generate the different ‘3rd Man’ and ‘4th Man’ runs.

The very same that the current Leeds manager himself described as: “Impossible for the opposition to defend, and the future of attacking football”.

One such excellent example of this was seen at the KCOM stadium on Tuesday the 2nd of October, as the away side combined rotation, interchange in shape and roles (& unsurprisingly out wide), to generate what is commonly dubbed in certain circles at least, as the “4th Man run”. To find Ezgjan Alioski in space and facing forward in front of goal.

To break this down with greater precision; a key distinction to identifying this lies in the fact that Leeds had been able to develop a quasi-4 vs.2 Diamond on the far side of the pitch [see photo below].

This in part then helped produce a superiority that ultimately translated in Alioski – the 4th Man, making a run not for the player on the ball, but to arrive later in the sequence. Given that defenders as a general rule (mainly) focus on what’s closest, this is near impossible to defend when executed adeptly.

The term “3rd Man Run” has become rather mainstream nowadays. So much so that it can often be broadly absorbed as when a player makes a run not for the player who is in possession of the ball, but the one who’s set to receive the 2nd pass.

Oftentimes this is possibly a bit too abstract, and in this respect potentially the best, nuanced description so far has come from one of the master conductors in chiefs to this paradigm, a certain Xavi Hernandez:

“The third man is impossible to defend. I explain: Imagine Piqué wanting to play with me, but I’m tightly marked. Well, it is clear that Piqué cannot pass it to me, it is evident, with that I move away (from the ball) and I take the defender with me. Then, Messi drops in to receive and becomes the second man. Piqué is the 1st, Messi the 2nd and I the 3rd.

Piqué, then plays with the 2nd man, Messi, who returns it, and at that moment I appear. I “fix” my defender (with an initial movement), who has been deceived, and Piqué passes me the ball totally unmarked. If the one who defends me is looking at the ball, cannot see that I’m unmarked then I appear and I’m the third man, and we have already achieved superiority.

It’s the Dutch School, it’s Cruyff. It’s an evolution of the Dutch triangles.”

Rather than a literal interpretation (which sometimes we’re all guilty) of the above, it would be more productive to extract the evolution of the “Dutch triangles” quote.

Equally to also take from Xavi’s explanation that the idea itself centers around using a second/additional player(s) to find an extra pass which attracts the opponent, that in turn then allows the third to play longer and/or deeper.

This means for example that in contrast to say the original “one-two”, the player who drops deep is no longer also the one who goes long to penetrate lines (This being what César Luis Menotti refers to as “vengo porque voy” – I come towards because I want to go). Instead the role is taken by the 3rd intended participant, who is expected to also time his movement and run to receive in space.

– A sample snippet taken from Marcelo Bielsa’s very own Athletic Bilbao training back in March 2003.

The game of course does not consistently provide for such exact demonstrations in terms of distinguishing between the two. Notwithstanding that it is not always necessary, as the key overall is for players to build connections close by to and move not just in relation to the immediate, as doing this can either free up space for a (nearby) teammate behind the opposition. Or allow to receive later in the sequence (either near or far).

However, in terms of subtle points with which to discern, you could identify that the “3rd Man” as per Xavi, focuses on creating a Triangle, and normally acts to provide depth.

Whereas the “4th Man” looks to impose more of a Diamond, rondo of sorts (normally 4 vs. 2) therefore involves more players too. The latter numerical aspect, and order of receiving the pass being a caveat in terms differentiating between both.

For example, Leeds’ equaliser against Sheffield Wednesday provides a demonstration of how the 3rd Man can even take subtle varying guises, in how Saiz and Roberts combine to find one of the teams principal beneficiaries of this mechanism, Mateusz Klich.

Whilst to offer an additional this time removed exemplar of the 4th Man, Maurizio Sarri’s Napoli provides superb value.

Indeed the Sarri comparison is rather apt, as there are certainly parallels in how both managers like their teams to “attract” the option to play, and with connections close to the ball to be able to penetrate through or overload to isolate on the far side.

Nonetheless when analysing with the intent to detect, it’s important to bear in mind that identical situations are something of illusion in football, and the word always offers little to no value.

Similarly a rigid textbook interpretation rarely if ever captures the true essence of the gameplay.

This being one of the reasons why it’s a good idea to look at other precedents, cross varied teams if possible such as maybe Chelsea under Sarri? Or even how Nuno Espírito Santos’ Wolves use their box 4 (Neves, Moutinho, Costa & Diogo Jota) in midfield to bring in their wing backs (Doherty & Jonny) into the equation in both the 3rd and 4th Man.

As well as interpreting from the mind-set that the spirit is chiefly destined to encourage to provoke players receiving between the lines, preferably with the goal in front of them and with less opponents than they did before.