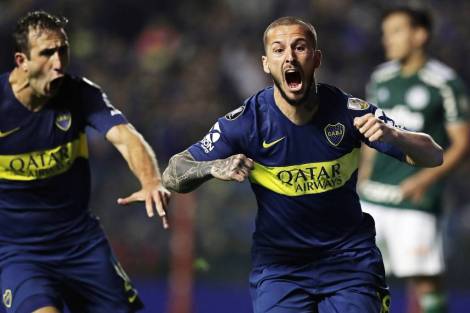 Darío Benedetto was the hero in La Bombonera on Wednesday evening scoring twice from the bench to give Boca Juniors a 2-0 first leg win over Palmeiras in the Copa Libertadores semi final.

Since rupturing the anterior cruciate ligament in his right knee back in November 2017, Benedetto has struggled to recapture anything near the form that saw the striker earn a place in Jorge Sampaoli’s Argentina squad but only six minutes after replacing Ramón Ábila, Benedetto provided the vital breakthrough in what had been a nervy, uneventful clash until that point.

Palmeiras had effectively stifled Boca and the supposed danger of Mauro Zárate, Cristian Pavón and Ábila had been nullified throughout, albeit at the expense of the Brazilians posing almost any threat of their own.

While Grêmio had been able to snatch an away goal 24 hours earlier against River Plate, that never really looked likely from Palmeiras but neither did a Boca winner as the game crept into the final ten minutes.

However, Boca’s deep squad provided Guillermo Barros Schelotto with options and the introduction of Sebastián Villa and Benedetto proved vital.

Lucas Olaza had just gone closest to scoring when his superbly struck free-kick was turned around the post by Weverton and from the resulting corner, Boca found a way through. Villa delivered and Benedetto rose to head firmly into the bottom corner to send La Bombonera into rapture.

The one-goal advantage would have been gladly accepted by Boca after such a tight game but minutes later Benedetto doubled the lead. The 28-year-old’s first displayed his penalty box instincts but the second his outstanding technique and ability to do the spectacular. A deft first touch left Luan for dead and a fierce low drive flashed past Weverton to push Boca firmly towards the Copa Libertadores final.

“It was hard for me to score again. It wasn’t going right for me. I am happy to return in a moment as important as a semi-final,” Benedetto told reporters at full-time.

“I’ve been working after many setbacks – I still have tendinitis, the strain. Those blows can crush you, but then this can also happen. I liked the second goal a lot because of the touch, but I prefer the first. It was a relief for me to score again after so long, more so in a semi-final.”

The two sides will meet again next week at the Allianz Parque and the job isn’t yet done but Boca are favourites to progress now.

“It will be a really hard game, it won’t be easy, we need to play with the same attitude, showing the same football, and we need to be dominant there,” manager Guillermo Barros Schelotto warned.

“They proved to be strong throughout the tournament, showing a really good mentality and an impressive physical strength, and it will be hard. It will not be easy. There is nothing defined yet.”