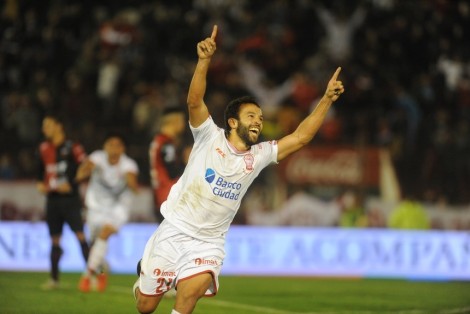 It would appear all Huracán needed to wake up was for Carlos Auzqui to be sent off as El Globo’s ten men subsequently cancelled out Colón’s two-goal lead and in a thrilling ten-minute second half spell snatched all three points.

Eduardo Domínguez returned to the Estadio Tomás Adolfo Ducó with his Colón side and for 70-odd minutes will have been confident of getting one over his former employers.

Huracán had been sloppy during the opening 45 minutes and when Israel Damonte gave away possession cheaply five minutes before the break, Colón swiftly countered. Tomás Chancalay’s shot took a slight deflection and was then helped into the net by the sliding Federico Mancinelli but if there was any doubt over whether the young Colón striker would be credited with the goal, Chancalay ensured his name would be on the scoresheet before half time.

Colón, usually so well organised defensively, would have been confident of seeing out the result, particularly when Carlos Auzqui saw red for a late challenge minutes after the restart.

However, a scrappy Lucas Gamba goal in the 73rd minute reduced the deficit and suddenly the mood changed. A minute later, Norberto Briasco crossed for Andrés Roa to tap in an equaliser and when Huracán were awarded a free-kick on the edge of the box, there was already a sense that a winner was coming.

Gamba stood over the ball and his curling effort took a touch off the top of the wall and left Leonardo Burián rooted to the spot. The Ducó erupted, Huracán were elated and Eduardo Domínguez raged.

El Globo held on for the win and with it climbed at least momentarily up to third.

Earlier in Victoria, Lanús managed to follow up last week’s first win of the season with a draw against Tigre.

After a goalless first half, Federico González poked Tigre ahead but the lead lasted only seven minutes before a corner at the other end resulted in Tomás Belmonte nodding in from close range.

Tigre’s inability to hold on for the win makes their relegation look all the more inevitable and while Lanús remain strong candidates for the drop next season, Luis Zubeldía has at least kickstarted a three-match unbeaten run.