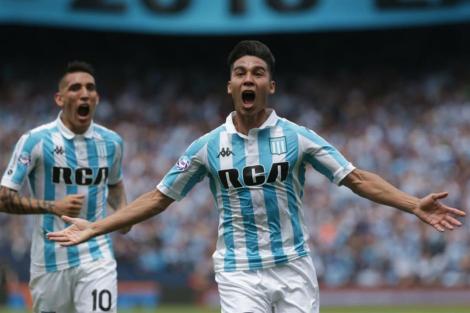 Racing Club’s hiccup in Tucumán last week saw La Academia suffer a first league defeat of the season and for 45 minutes on Sunday morning, Eduardo Coudet’s side were second best against San Lorenzo. However, a much improved second half saw Racing come from behind to seal a 2-1 victory and with it maintain their lead at the top of the table.

Despite taking a less than full strength side to Avellaneda due to an upcoming Copa Argentina quarter final, San Lorenzo produced an impressive first half display and deservedly led after half an hour thanks to Nicolás Reniero.

Unable to have extended their lead, San Lorenzo’s good work was undone within a minute of the restart when Gonzalo Rodríguez cleared against Gustavo Bou, the ball ricocheted in behind and Lisandro López raced away to delicately clip it over Nicolás Navarro.

López’s finish was deft and in contrast to Racing’s second, a fiercely struck shot from distance by substitute Pol Fernández that ultimately proved to be the winner.

Fernández wasn’t the only one on Sunday to score a blinder and thanks to Braian Cufre’s sensational strike Vélez Sarsfield celebrated a 1-0 win over Belgrano in Liniers.

It was no more than Gabriel Heinze’s side deserved after a dominant display that had only lacked an earlier goal. Belgrano goalkeeper César Rigamonti was called upon on several occasions during the first half and when the visitors had Gastón Gil Romero shown a second yellow card before the break, the chances of the points heading back to Cordoba looked slim.

Luis Abram had a goal somewhat harshly ruled out for a foul on Rigamonti and Agustín Bouzat saw the offside flag correctly deny him but eventually the breakthrough arrived. And it did so in spectacular fashion, Cufre blasting the ball in off the underside of the crossbar from 30-yards.

Twelve games without defeat at the Estadio José Amalfitani now for Vélez while Belgrano’s relegation fears only deepen.

And while Belgrano sweat over the prospect of B Nacional football next season, Patronato are still fighting for their survival.

The Paraná club remain rooted in the drop zone but Facundo Barceló’s brace handed Patronato victory over Rosario Central and provides hope that there is still a route to safety.

It took a little spot of luck as referee Nicolás Lamolina failed to spot an elbow by Lautaro Geminiani on Federico Carrizo and Central full-back Alfonso Parot had bent a shot that struck both posts prior to Patronato’s opener but in a dogfight those breaks are needed. When the ball did eventually bobble into the path of Barceló, the striker made no mistake.

Germán Herrera headed Central level immediately after the break and after managing to keep the visitors out, Patronato’s Barceló arrived unmarked in the penalty box to nod in a stoppage time winner.

Central now head into a huge Copa Argentina clasico against Newell’s and Edgardo Bauza’s future may already hinge on the result.