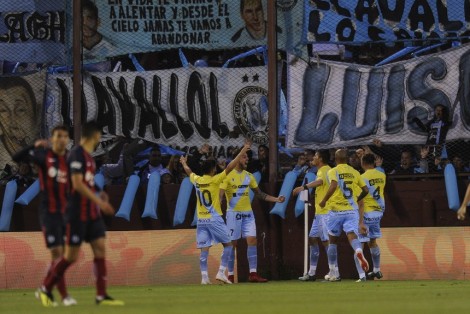 There have been no shortage of upsets in this year’s Copa Argentina but as Roberto Brum slotted home the decisive penalty to put Temperley in the semi final it was always likely to signal the end of the road for Claudio Biaggio at San Lorenzo.

So it proved as within minutes of San Lorenzo crashing out Biaggio had walked. The club now forced to look on as it is the B Nacional club awaiting the winners of Thursday’s Clásico Rosarino for a place in the final.

Ramiro Costa nodded Temperley in front after quarter of an hour in Lanús and a dreadful San Lorenzo display could easily have been punished within the 90 minutes.

Nicolás Blandi headed against the crossbar from what was a rare chance created and when Fernando Belluschi was sent off on the hour mark, Biaggio’s side looked down and out.

A deflected Blandi strike in injury time forced penalties and it looked as though San Lorenzo’s blushes would be spared but Temperley goalkeeper Matías Castro saved first from Pablo Mouche and then again from Ariel Rojas. Perfect from the spot, Temperley kept their cool and eventually Brum stroked in the fourth to seal victory.