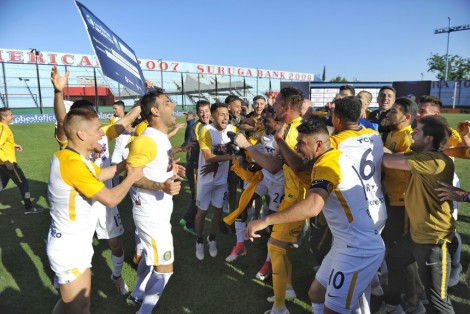 With the world preoccupied with one Argentine derby, another was taking place on Thursday afternoon and although it was easy to forget about the Clásico Rosarino, given it was being played behind closed doors in Sarandí, Rosario Central triumphed over Newell’s Old Boys to book a place in the Copa Argentina semi final.

Neither side have been in particularly good form and so sought a clásico victory to ease any current feeling of discontent. However, while Central close on a fourth cup final in five years, Newell’s manager Omar de Felippe faces an uncertain future.

An fairly uneventful first half failed to produce a breakthrough for either side and left the highlight being small groups of supporters from both sides making their presence known from outside by clambering on top of neighbouring houses and setting off fireworks.

The tie eventually sparked into life just after the hour mark when Germán Herrera spectacularly flicked a Central corner inside the near post and just when De Felippe needed a reaction, his side capitulated.

A swift counter saw Fernando Zampedri double the lead with a volley into the bottom corner and when the customary clásico handbags saw Newell’s have Teodoro Paredes and Hernán Bernardello sent off along with Central’s Federico Carrizo, the result looked all but confirmed.

Joaquín Torres pulled one back in stoppage time but there wasn’t time for a grandstand finish and Newell’s slumped out.

Central will play Temperley in the semi finals and if indeed El Canalla reach another final they will be hoping for better luck after three consecutive defeats.