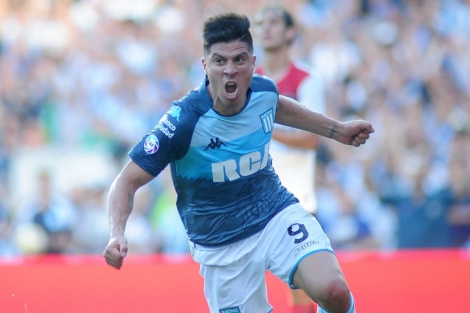 It certainly wasn’t the best Racing performance under Eduardo Coudet but Jonathan Cristaldo’s header was enough to give La Academia victory over Newell’s Old Boys on Sunday evening and with it send Racing seven points clear at the top of the table.

After losing Argentina squad members Matias Zaracho and Renzo Saravia to injury during the first half, Racing needed a boost and they got it on the stroke of half time as Cristaldo stooped to nod past Alan Aguerre.

Lisandro López twice had the ball in the net during the second 45 minutes, once correctly flagged offside and the other horrendously pulled back by the over-eager linesman.

However, Newell’s too had their chances and besides a decent penalty claim, came close to forcing an equaliser on a number of occasions. Following defeat to Rosario Central in the week it would have been easy for Newell’s to roll over but La Lepra battled and ensured that Racing were made to work for the win.

Admirable yet ultimately unrewarded, Newell’s left Avellaneda with nothing and Racing are now in a commanding position. Defensa y Justicia, with their three games in hand, can still go above La Academia but the rest of the field are playing catch-up.

Finally in Tucumán it was the meeting of the two San Martín’s and with both fighting against relegation, three vital points were on the line.

San Martín de San Juan had earlier been fuming over the awarding of a penalty for an apparent handball that on replay looked more like Federico Milo’s shoulder. However, Luis Ardente’s fingertips save to deny Claudio Bieler from the spot meant that the visitors weren’t punished.

The game remained in the balance until the 66th minute when veteran Tino Costa whipped in a free-kick from a position out wide on the right and without taking a touch it whistled past Ardente.

Seven points from the last nine available, the Tucumán club are off the bottom of the promedio and in their first season up with the ability to improve their average much quicker there is a realistic path to survival.