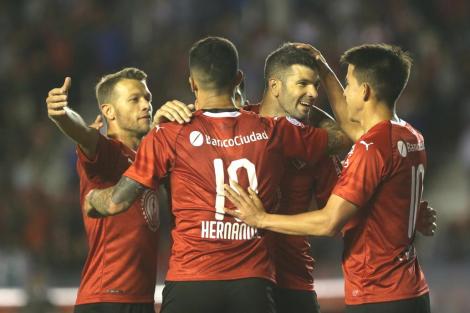 The scoreline was perhaps harsh on San Martín de Tucumán but those at the Estadio Libertadores de América on Wednesday evening couldn’t have cared less as Independiente stuck four goals past the Superliga newcomers to go fourth.

Rearranged from the opening weekend, Independiente were eager to make up lost ground and the delay in this fixture had seen seen San Martín play themselves into a decent patch of form, arriving in Avellaneda unbeaten in three.

That newfound confidence was clear and Walter Coyette’s side more than held their own over the course of 90 minutes but were ultimately undone by the extra quality that this Independiente side possess.

The home side had been the better side during the opening 45 minutes and a slick one-touch passing move sliced through San Martín and saw Pablo Hernández tap in. The Chilean international back in the team due to injury to Martín Benítez repaying the locals for his two costly red cards this season.

Martín Campaña had to be alert to keep out a well struck Tino Costa free-kick and although it was El Rojo sensing they should have been further ahead at the break, it was the visitors who looked far more likely to score the next goal after the restart.

However, that spell of superiority as Independiente’s intensity dipped failed to really test Campaña further and eventually San Martín were punished.

Jorge Carranza’s attempted punched clearance caught Nicolás Figal and despite his protests referee Facundo Tello pointed to the spot allowing Fernando Gaibor to double the lead and all but end any resistance.

With ten minutes remaining the points were secure but Independiente made absolutely certain with two further late goals. Substitute Braian Romero headed in unmarked and deep in stoppage time Emmanuel Gigliotti added a fourth, sweeping in Maxi Meza’s cut back. 12 goals in 11 games now for Gigliotti, whose remarkable form shows no signs of stopping at present.

The four-goal margin pushed Independiente up into the top four still some seven points behind leaders Racing but with eyes fixed on at least Copa Libertadores places.