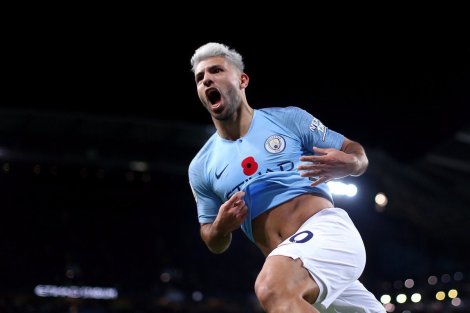 The Superclásico dominated the headlines in Argentina this weekend but there were plenty of Argentinos in action over in Europe this weekend and many among the goals.

Boca Juniors versus River Plate wasn’t the only derby of significance this weekend and while there was nothing between the Copa Libertadores finalists, Manchester City were far superior to their city rivals.

David Silva had bundled City ahead early and the result rarely looked in doubt despite the home having to wait until the second half to add to their lead. Sergio Agüero may have changed his hair colour but the striker was as dangerous as ever and just after the restart, Agüero exchanged passes with Riyad Mahrez before unleashing an unstoppable finish past David de Gea.

The goal was Agüero’s 151st in 218 Premier League appearances, his 208th for City and his eighth against United, overtaking Eric Cantona and equalling Wayne Rooney as the Premier League leading goalscorer in the derby.

United pulled one back through a Anthony Martial penalty but a fine passing move finished by Ilkay Gundogan wrapped up the points and took City back to the top of the table.

A day earlier in the Premier League, Tottenham Hotspur earned a 1-0 win over Crystal Palace and Juan Foyth was the unlikely match winner.

The 20-year-old gave away two penalties on his league debut last week but redeemed himself to head in from close range and earn Spurs a vital three points.

Manager Mauricio Pochettino hailed Foyth’s ‘fantastic’ performance as the squad credited the youngster with bouncing back from disappointment.

“He is an intelligent, smart player and he has the potential to be one of the best centre-backs in Europe,” Pochettino told reporters after the victory.

“He has so much potential and only needs time and games to improve. After last week we said ‘you need to forget that situation’ because it has happened and it can happen to footballers.”

Across The Channel in Ligue 1, Argentina’s deadliest striker this season, Emiliano Sala was on target again as Nantes earned a 1-1 draw away to Stade Rennais.

A superb header by the 28-year-old swiftly cancelled out the home side’s opener and although neither side could find a winner, Sala’s eleventh of the season took him level with Kylian Mbappe at the top of the scoring charts.

Inter’s six-match winning streak was brought emphatically to an end by Atalanta on Sunday in Serie A despite Mauro Icardi adding to his tally.

The Inter captain brought his side level from the penalty spot shortly after half time after Atalanta had somehow only led by one at the break but it wasn’t long before the home side’s superiority shone through.

Two towering headers from set-pieces had put Atalanta firmly in control before Alejandro Papu Gómez wrapped up the win in style, cutting in off the left to fire into the far corner.

City rivals AC Milan also had an afternoon to forget and none more so than Gonzalo Higuaín as Juventus claimed a 2-0 win.

Mario Mandzukic had given Juve an early lead but Higuaín had the chance to level before the break only to see his penalty tipped onto the post. After the player signed to replace him in Turin, Cristiano Ronaldo doubled the lead nine minutes from time, Higuaín lost it.

The striker was shown a red card late on and after being restrained by teammates was forced to apologise after the game: “I want to apologise to the team, the fans and the coach for my reaction.”

Recent Argentina International Rodrigo de Paul also missed from the penalty spot as Udinese slipped to a 2-1 defeat away to Empoli.

The home side were already two-up when De Paul blazed over and although fellow Argentinian Ignacio Pussetto volleyed a goal back late on, it wasn’t enough to help salvage a point.

Barcelona welcomed Lionel Messi back into the starting eleven after a speedy recovery from his fractured arm but the world’s best player couldn’t prevent the Blaugrana slipping to a surprise defeat to Real Betis at the Camp Nou.

Junior Firpo and Betis icon Joaquin gave the visitors a stunning two-goal lead at half time  but when Messi pulled one back from the penalty spot, few would have counted against Barcelona coming back to steal the points.

However, Marc-Andre ver Stegen allowed a shot from the hugely impressive Giovani Lo Celso to squirm through his grasp and even after Messi helped create another, Sergio Canales added a fourth for Betis.

Messi tapped in his second in stoppage time but couldn’t prevent the defeat and with it Barça’s lead at the top was cut to just a point.

And it is Sevilla only one point off the pace after a come-from-behind victory over Espanyol.

Trailing until 20 minutes from time, Ever Banega’s dangerous inswinging corner found the run of Gabriel Mercado and the former River Plate defender poked the ball in from close range.

Just as it looked like Pablo Machín’s side would have to make do with a point, Banega slipped in Wissam Ben Yedder and the French striker clipped in an 89th minute winner.

Banega hasn’t featured for Argentina since the World Cup but with another two assists this weekend and Sevilla riding high, the playmaker is looking back to his best. With something still to contribute, La Albiceleste could do worse than find space to give Banega another opportunity.