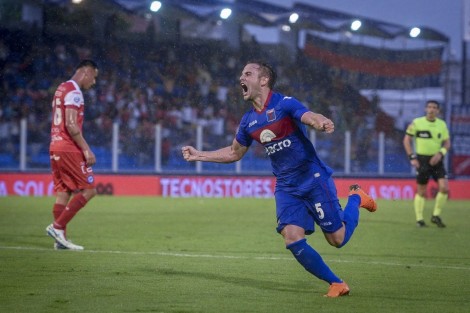 With a top half finish and Copa Sudamericana qualification confirmed Argentinos Juniors weren’t really considering relegation this season but an atrocious run of form, a concerning lack of goals and a damaging defeat to Tigre on Monday evening have thrust Los Bichos right back in the mix.

Ezequiel Carboni had already been relieved from duty at one relegation candidate this season after overseeing a dreadful start at Lanús and his short stint in charge of Argentinos Juniors is now also over after a fifth consecutive defeat.

Argentinos won’t have many better chances to pick up three points than they did in Victoria on Monday but Carlos Luna’s 87th minute diving header snatched victory for ten-man Tigre.

Given Tigre, sat bottom of the promedio, look dead certs for relegation and had goalkeeper Augusto Batalla sent off after five minutes, chances of the home supporters celebrating a win looked slim. Angered at the linesman not giving a decision, Batalla raged and the River Plate loanee’s decision not to calm when referee Andrés Merlos produced a yellow meant a red swiftly follow.

With the numerical advantage, Argentinos soon took the lead thanks to Francisco Ilarregui’s misplaced cross shooting over Gonzalo Marinelli’s head and inside the far post. A goal that ended a drought of over 575 minutes and set Carboni on course for a first win as manager.

However, unable to find a second, Tigre never gave up and with 20 minutes remaining the home side were level. The impressive Lucas Menossi stood over a free-kick 25-yards from goal and produced a sweetly struck, curling effort into the top corner that left Lucas Chaves rooted to the spot.

Even a point in the circumstances would have felt like a wasted opportunity for Argentinos but it got worse when three minutes from time, substitute Luna escaped youngster Nehuen Perez and bravely headed the winner.

Tigre still bottom, still look destined for the B Nacional but Argentinos Juniors are in free-fall, sitting only narrowly in safety and now on the look out for another new manager.

Delayed from Sunday due to the rearranged Superclásico, conditions were less than ideal as the rain fell in Buenos Aires but it didn’t prevent Huracán taking a deserved first half lead.

Andrés Chávez headed El Globo in front and on the stroke of half time a rash challenge by Fabricio Angileri on Norberto Briasco saw Lucas Gamba double the advantage from the spot.

Gabriel Ávalos heading a goal back for Godoy Cruz ten minutes from time set up a nervy end but Huracán held on for the points and with it stay six points behind league leaders Racing Club.