There was no avoiding Argentina’s major talking point this weekend but away from the chaos of the Superclásico there was plenty of Superliga action. The league leaders dropped points which saw the two somewhat surprise challengers close the gap while results near the foot of the table led to yet another managerial casualty.

Out in front for weeks and wanting to extend their lead into the summer break, Racing Club welcomed Banfield to Avellaneda on Sunday evening but despite dominating for large periods found Julio César Falcioni’s side a difficult nut to crack. A terrific display by Colombian goalkeeper Mauricio Arboleda kept La Academia at bay and the goalless draw allowed others to close in on Racing.

Notably Atlético Tucumán, who came from behind in Córdoba to defeat relegation threatened Belgrano. Leonardo Sequeira’s early penalty looked to throw a spanner in the works but El Decano were soon level and the iconic Pulga Rodríguez wrapped up a 3-1 win to close the gap to two points.

Defensa y Justicia might narrow that even further after their victory over Tigre means that a win in their remaining game in-hand closes Racing to within a point. Much like Belgrano, Tigre are scrapping for survival and for a while appeared to be frustrating their hosts but after Walter Montillo pulled the visitors level, Ignacio Canuto was sent off and soon after Nicolás Fernández won it for El Halcón. 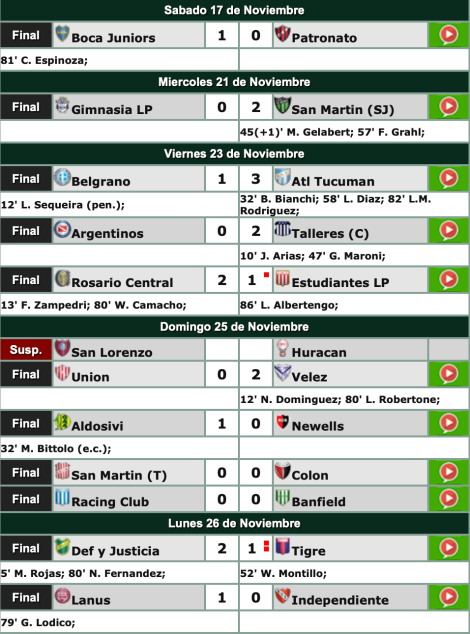 Cristian Espinoza’s goal a week earlier had given Boca Juniors victory over Patronato as they looked to get the fixture out the way before the Copa Libertadores final second leg and while Boca had the luxury of being able to play both (in theory) the 24-hour delay of this weekend’s match saw the Clásico between San Lorenzo and Huracán postponed.

In their absence Independiente were looking to jump into the top four but slipped up on Monday evening when a dreadful display was punished by Lanús – Gastón Lodico striking late to give Luis Zubeldia’s side a morale boosting three points.

Vélez were one of the weekend’s big winners as Gabriel Heinze’s side finally ended their wait for an away win. Nicolás Domínguez and Lucas Robertone handed Vélez a 2-0 win over Unión in Santa Fe and if Vélez can maintain such form on the road, then the only way is up.

Talleres piled further pressure on Argentinos Juniors with a 2-0 win in La Paternal and Los Bichos are in such wretched form that they are nervously watching those clubs below battling away in the relegation dogfight.

San Martín de San Juan climbed out of the bottom four with victory away to Gimnasia and Belgrano’s already mentioned defeat sees El Pirata complete the bottom four at present.

Another side anxiously watching developments are Newell’s Old Boys and there unfortunate defeat to Aldosivi saw Omar de Felippe admit defeat and resign as manager. La Lepra still have breaking space but with relegation next season an even greater danger, this next appointment is vital.