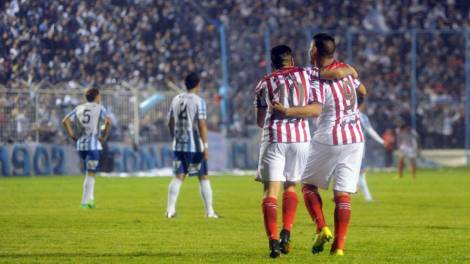 While the world watches the train wreck that the Superclásico has become, Tucumán provided its very own clásico on Saturday evening at an electric Estadio Monumental José Fierro and it was glorious. High-flying Atlético were looking to at least momentarily leapfrog Racing Club at the summit of the Superliga while San Martín are fighting for survival in their first season back in the top flight.

Everything was on the line but there was no doubting who were favourites and the vociferous home support made it clear what they were expecting. For move than half the game that didn’t look in much doubt.

A clumsy Lucas Acevedo challenge on Guillermo Acosta saw Luis Rodríguez slot in a tenth minute penalty to give Atlético the lead and when the wily Pulga pulled the ball back for David Barbona to double the advantage moments after the break, the points looked secure.

San Martín however, have shown plenty of fight in recent weeks and almost immediately the visitors pulled a goal back, Luciano Pons pouncing on a spilled header on goal by keeper Cristian Lucchetti.

Belief suddenly flowed through Walter Coyette’s side and after Lucchetti was forced to swat away a couple of stinging efforts on goal, Acevedo rose to head in from a 73rd minute corner.

And it didn’t end there. In almost the next attack the ball was worked wide to substitute Gonzalo Rodríguez and while Lucchetti got down to keep out his shot, the ball skidded across goal where Tino Costa was on hand to tap San Martín in front.

Atlético had blown it and despite piling forward El Decano couldn’t find a third goal of their own. The result took San Martín out of the relegation zone for the first time this season and a survival that looked impossible a few weeks ago now appears realistic. However, Racing Club were perhaps the biggest winners as one of their main title challengers squandered a great opportunity.

One side in danger of sliding in the opposite direction to San Martín have been the Superliga’s lowest scorers Argentinos Juniors but Los Bichos secured a vital win over Banfield to spoil an emotional farewell for manager Julio César Falcioni.

Ill-health has seen Falcioni spend a lot of time away from the dugout over the past year and with the news that the iconic coach would not be extending his contract at the end of the year, Banfield supporters let Falcioni know exactly how they felt ahead of kick off.

As the Emperor held back the tears the game got underway and it was surprisingly Argentinos Juniors on top. What was less of a shock was that the visitors didn’t make that count and unable to add to their three league goals during the first half, another narrow away loss didn’t look beyond the realm of possibility.

However, shortly after half time Alexis Mac Allister broke the deadlock, the midfielder’s free kick wrong footing Mauricio Arboleda to skid into the far corner and although Darío Cvitanich did have the ball in the back of the net, the finest of offside calls denied Banfield an equaliser.

Argentinos halted a run of six straight defeats with their second win of the season and with it put the brakes on their descent towards relegation but it wasn’t the ending that Falcioni’s script deserved. The title winning coach will likely move into some other role at the club as former Argentina striker Hernán Crespo reportedly waits in the wings as his replacement.

In Quilmes, Lanús followed up last Monday’s victory over Independiente with a draw against Estudiantes.

A lightning quick start saw Gastón Fernández give Estudiantes the lead inside a minute with a well struck shot from distance but it didn’t last long. Nicolás Pasquini saw a header blocked in the six-yard box and Lautaro Acosta was alert to drill the loose ball past Mariano Andújar.

Both sides had chances to win it but Lanús came closest with Andújar palming an Acosta shot against the crossbar. El Granate will perhaps be frustrated not to snatch the points but the improvement under Luis Zubeldia is clear.