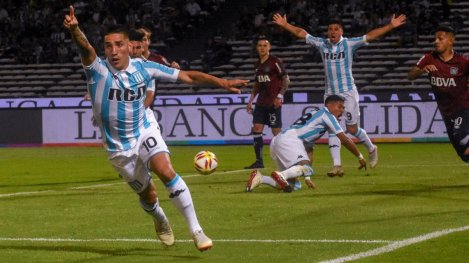 If Racing’s goalless draw with Banfield last week was seen as a missed opportunity, this round of Superliga action was a roaring success for La Academia as victory over Talleres in Córdoba along with Atlético Tucumán and Defensa y Justicia dropping points meant Racing are now five clear at the top.

All of Talleres’ best laid plans went out the window on Monday evening when a defensive lapse allowed Ricardo Centurión to put Racing ahead after a minute. Juan Komar gave the ball to Lisandro López and after being fired across goal by Jonathan Cristaldo it was Centurión at the back post to do juse enough to force it over the line despite Guido Herrera’s efforts.

Talleres, loose in possession again, allowed López to nick the ball and release Cristaldo where the striker’s clever dummy saw Herrera slice him down in the box. Captain López stepped up and sent the goalkeeper the wrong way to double the lead and with only 23 minutes on the clock the points looked secure.

A gorgeous finish by López made it three shortly after the break and although Junior Arias was able to pull one back following a fumble by Javier García it made no difference.

With one road of fixtures left before the summer break, Racing will take some catching in the second half of the campaign and will rightly be considered title favourites with their current lead.

Unbeaten Defensa y Justicia and fifth-placed Huracán were both aiming to close the gap on Racing but Lisandro Martínez’s 89th minute equaliser ensured a share of the spoils and an ideal outcome for La Academia.

An absorbing opening 45 minutes in Parque Patricios saw both sides go close. Ezequiel Unsain’s fingertips forcing Carlos Auzqui’s shot against the inside of the post at one end before Matías Rojas’ curling effort clipped off the crossbar at the other.

It looked as though the first half would end goalless when three minutes before the break, Andrés Chávez drilled the ball across goal and strike partner Lucas Gamba’s near post finish beat Unsain.

A less exciting second period meant it looked as though Huracán would hold on for the win but with a minute remaining the home side’s defence allowed Alexander Barboza to nod the ball down in space and having failed to track the run of Lisandro Martínez, the 20-year-old fired in the equaliser.