The historic Copa Libertadores in the bag River Plate now head to the UAE for the Club World Cup and while Real Madrid could lie ahead, Jack Tilghman suggests there is far greater reasons for optimism than there were in 2015…

After winning the most important match in the club’s history, River Plate coaches, directors, and players have had little time to enjoy the triumph. Less than 48 hours after the victory, the team packed up and moved on the United Arab Emirates for a second try in four editions to become the first Argentine club to win the FIFA Club World Cup in its current format.

Four years ago, everything felt different for River. At the time, it had been 19 years since River had played a European club in an official match: the 1996 Intercontinental Cup against Juventus.

Although the Club World Cup is not at the top of the priority list for most European clubs, for South American sides it is the ultimate measuring stick against the world’s best sides, nearly all of whom play in Europe. For River, and its fans, winning the 2015 Club World Cup in Japan became an obsession. 20,000 supporters travelled to the island nation with the expectation of seeing River beat Barcelona with the world’s best player, Lionel Messi, in its ranks.

The calendar added to the anticipation. After lifting the Libertadores against Tigres with a resounding 3-0 win in El Monumental on August 5th, the Millonarios had four eternal months to wait for the showdown with Barcelona. The team took its eye off the ball in the domestic league, often resting players and finishing in 9th place. Even a chance at defending the Copa Sudamericana crowd was not deemed worthy of River’s full focus as the club seemed distracted, crashing out in the semifinal to Huracán.

Everything, for four months, was focused on the Club World Cup, from the boardroom down to the supporters. Every media session was dominated by questions about the showdown with Messi and company. The fact that River would need to overcome a semifinal opponent to face Barcelona was almost an afterthought.

Then, the day finally arrived for River’s debut in Japan and the players looked so tight. The hype surrounding the potential Barcelona showdown causing everyone from fans to media to overlook the semi, seemed to have infected the players as well. The thought that they may not even make it to the Final quickly became a reality. Goalkeeper Marcelo Barovero made four outstanding saves to keep River in the match, before striker Lucas Alario headed the game’s only goal 18 minutes from time. It was a labored, nervous performance by River who seemed shocked that Sanfrecce Hiroshima even dared to end their chances of a dream final against Barça.

The Final was not much better for River. Although Barcelona clearly possessed the far greater group of players, one could not help but feel River were far too nervous. They were nervy, unable to complete simple passes. After Lionel Messi’s 36th minute strike, River were never in it. Luis Suárez killed off the match with two second half goals and River’s dream was over.

This time however, things are very different for River. For one, the Libertadores match was the main target for the club. Playing Boca in the Final and all that surrounded it, made it the match of the century. There has not been a four-month build up to make this an obsession in the eyes of players, fans, and coaches. Beating Boca was the ultimate goal, now anything River can get out of the Club World Cup will be a plus. The team will not be handcuffed by the pressure now. They will be able to play loose, knowing that no matter what happens, the supporters will forever be happy after beating Boca not only in the Copa Libertadores Final, but also in the Supercopa Argentina Final in March.

Having been there before will also help. Many players have left River, but captain Leonardo Ponzio, Jonathan Maidana, Gonzalo Pity Martinez, Camilo Mayada, and Rodrigo Mora all played in the 2015 edition. Goalkeeper Franco Armani also has experience in the Club World Cup, having started for Atlético Nacional in 2016.

River has also been able to keep its team together. With the Libertadores ending in the European summer back in 2015, it meant the vultures of European football were all circling looking for River’s talent. Centerback Ramiro Funes Mori, a goal scorer in the Final against Tigres, was sold to Everton, Captain Fernando Cavenaghi had retired and midfielders Carlos Sánchez and Matías Kranevitter had already signed contracts with Monterrey and Atlético Madrid respectively. Both players seemed to take four months off, trying to avoid injury, before trying to turn the switch on in the Club World Cup. At this level of football, you need to enter competition playing at a high level, not coasting by. 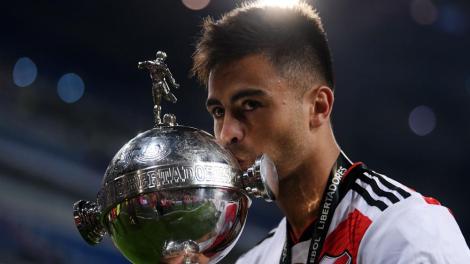 Although Pity Martinez will certainly be leaving for Atlanta United in the new year, he enters the Club World Cup playing at the highest level of his career. The quick turn around means Pity has had no choice but to remain 100% focused. Same goes for young midfielder Exequiel Palacios, who is rumored to be headed to Real Madrid in January.

The last factor making this year’s tournament so different is the form of Real Madrid. In 2015, even though River fans travelled to Japan with the set goal of beating Barcelona, the reality is that even had River played to its potential instead of being a nervous shell of the side that won the Libertadores, Barcelona had by far the best front three in the world with Messi, Neymar, and Suárez, and winning was always going to be mission impossible. This Real Madrid team has been outside of the Champions League places much of the year, losing to the likes of Eibar, Levante, and Alaves. In the Champions League, Madrid won the group, but were beaten twice by CSKA Moscow and labored against Victoria Pilzen.

That is not to say that Real Madrid is a weak side. They are by far superior than River. Luka Modric deservedly won the Balon d’Or after his exploits winning the Champions League for Madrid and helping dark horses Croatia make the World Cup Final. Thibaut Courtious was voted the Golden Gloves for best goalkeeper of the World Cup and although his form has not been perfect for Madrid so far, he is clearly amongst the top three keepers in the world, probably the best on his day. Gareth Bale is a player capable of magic at any moment and is now the main man. Marcelo, Tony Kroos, Karim Benzema, Sergio Ramos, Carvajal, Isco, Casemiro, the list of Champions League winners goes on and on.

Yet despite this group of galacticos, one cannot help but feel that with the departures of manager Zinedine Zidane and forward Cristiano Ronaldo this version of Real Madrid has lost much of its mystique. The have already replaced one manager, and in the driver’s seat is former River player Santiago Solari. To say the ex-San Lorenzo man is on thin ice is an understatement. With almost no managerial experience, Solari has been in a running feud with Isco, who saw the Bernabeu crowd turn on him in the club’s humiliating 3-0 loss to CSKA Moscow Wedneday, and the Madrid newspapers and radio shows have their knives out as always.

Even last year, with Ronaldo in his best form, Madrid fell behind to Al-Jazira before beating them 2-1 and could only beat Grêmio by a goal to nil. Two years ago, Madrid found itself on the verge of losing the Final to unfancied Kashima Antlers in a controversial affair. Los Blancos needed a Ronaldo penalty to send the game to extra time, where the Portuguese added two more goals to give Madrid the 4-2 victory. Without Cristiano to bail them out, is Real Madrid there for the taking?

There is no question that River will need to play its absolute best to topple los Merengues, but nothing is impossible. Without the 19 years of anticipation to prove themselves amongst the best and their eternal rivals vanquished in the biggest Final of them all, this Club World Cup will be an unexpected bonus for River.