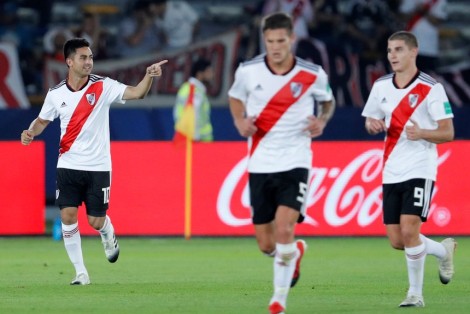 River Plate know that they should have been playing Real Madrid today for the Club World Cup but didn’t allow that disappointment to affect their performance in the third-place playoff against Kashima Antlers. Gonzalo Martínez, playing his last game for the club, served a reminder of just what a miss he will be as the Atlanta-bound star came off the bench to score twice in what ended up being a comfortable 4-0 win.

Despite Marcelo Gallardo opting to field a far weaker side on paper following the shock defeat to Al Ain, River produced a more focused and committed display that proved too much for their Japanese opposition.

A tremendous reflex save by Germán Lux ensured River didn’t fall behind early again while the second-choice goalkeeper’s opposite number, who had also been called into action was replaced after a challenge with Rafael Santos Borré.

Moments after Kashima were forced into that change, River led with Bruno Zuculini heading in at a corner.

Youngster Julián Alvarez perhaps should have doubled the lead only for a fine block by Hitoshi Sogahata to deny him but the 18-year-old was to still make an impact.

The youngster almost created a second only for an offside flag to harshly rule out Santos Borré’s effort and it wasn’t long after when another perfectly weighted pass allowed Pity Martínez to double River’s lead off the bench.

Kashima still posed something of a threat but couldn’t find a way past Javier Pinola and the closest the J League side came was a shot that clattered against the crossbar.

Santos Borré made it three from the penalty spot and in stoppage time Martínez saved the best until last. A burst into the penalty box was followed by a delicate chipped finish that dropped inside Sogahata’s far post and wrapped up the victory.

Martínez will be missed hugely but has contributed to a terrific period in River’s history and despite the disappointment of missing out on challenging for the Club World Cup, no one can deny Los Millonarios’ joy at the end of 2018.