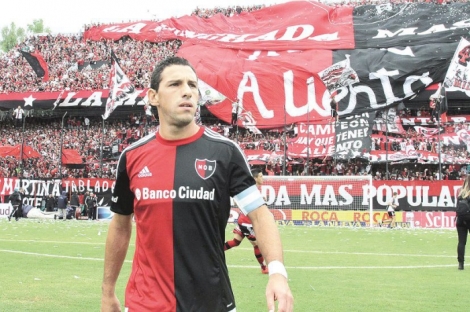 It’s the right time of year for miracles and after a pretty miserable 2018 Newell’s Old Boys have been given the best Christmas gift possible with the news that club icon Maxi Rodríguez is returning.

Almost 18 months Maxi sat in a press conference with tears in his eyes as he announced he would be leaving Newell’s. The club was in a bad way on and off the pitch and the former Argentina international said, “Everything that happens here, wears on you mentally. For my health, I have chosen to leave. My family support me but it is a decision that has taken a long time.”

The beneficiaries of that decision were Uruguayan giants Peñarol, with whom Rodríguez has lifted back-to-back titles, but as it looked like the 37-year-old would be extending his stay in Montevideo, Newell’s surprised almost everyone with the announcement that La Fiera is back.

Not that Maxi didn’t state that he still intended to retire in Rosario when he bid farewell in 2017.

“In Argentina, I will only ever play for Newell’s. I can’t imagine wearing another shirt. I want to retire here and if nothing unusual happens, I’ll come back.”

Well nothing unusual has happened but Newell’s remain in trouble and have hardly resolved matters off the pitch. A tense atmosphere with the club’s barra brava still looms in the background, not aided by performances on the pitch.

Interim manager Héctor Bodoglio has been handed the job on a permanent basis after back-to-back wins before the break steadied the ship that had begun letting in water under Omar de Felippe. However, La Lepra still hover above relegation and even if this season is likely safe, the threat will only be greater in one year unless results improve dramatically.

Maxi should help see that happen, not only for what he brings as a player but his leadership. An academy product and one of Argentina’s brightest talents at youth level, Rodríguez left in 2002 at the age of 21. After a glittering career with the national team and in Europe with Espanyol, Atlético Madrid and Liverpool, the midfielder pulled the red and black shirt of Newell’s back on again in 2012 and it was during this second stint that Maxi’s status was really confirmed.

A Primera title under the guidance of Gerardo Martino and a tremendous run to the Copa Libertadores semi finals saw Newell’s momentarily assert themselves as the top club in Argentina.

That swiftly fell apart and while Maxi won’t be returning to bring back that level of success, his importance to the new set of targets can’t be understated.