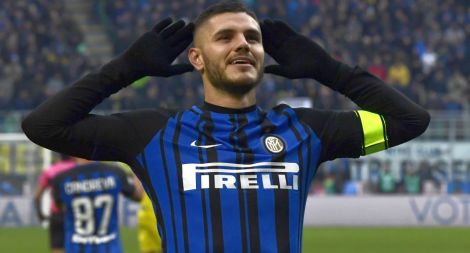 As one of European football’s most prolific number nines Mauro Icardi has no shortage of suitors from the continent’s biggest clubs and as such the Inter captain and his agent-wife Wanda are very publicly playing hardball over a new contract with the Italian giants.

With nine goals this term and an impressive 120 goals in 204 games for Inter, Mauro Icardi is already among the club’s top scorers of all-time. The Argentinian has been captain since 2015 despite still being only 25 years of age and even while Inter have struggled in recent years, Icardi has consistently found the net.

It is with this in mind that the centre forward and his wife, the outspoken Wanda, believe Icardi’s value is far greater than what Inter are currently willing to offer.

Inter have reportedly offered a €7 million-per-year salary with a foreign release clause higher than the current €110 million valuation but Nara is said to want closer to €9 million.

“Icardi’s renewal with Inter is a very long way off as things stand today. There are very important clubs that are interested in signing Mauro and we are very far from reaching an agreement [with Inter]. The figures that are being talked about in Italy about his contract renewal are not accurate. So far, we have not received a satisfactory offer from Inter,” Nara told AS.

“We are not ruling out reaching an agreement at some stage, but at the moment we are a long way off from that,. It is not logical for Mauro to renew on the same salary that he receives now. We believe that Mauro is at a superior level. We have a very good relationship with the two biggest clubs in Spain who, are very interested in Mauro, as well as one in France and one in England.”

Rumours of interest from Real Madrid and Chelsea have been long standing and are only natural for a 25-year-old centre forward who has scored as freely as Icardi has on a consistent basis since arriving in Italy in 2011.

But informing the press of such talks has understandably irritated Inter and with tension mounting Icardi has reportedly been fined €100,000 for reporting late to training and La Gazzetta dello Sport suggested that the club requested the striker find a new agent.

Such stories have in turn angered Icardi, writing on his Instagram: “Where do these phrases come from? How is it possible that La Gazzetta writes this rubbish?

“Furthermore, I’d like to point out that I am very, very happy and satisfied with the work we’ve done so far. For this reason, it’ll always be Wanda Icardi who takes care of my and our interests until the end of my career.”

Adding on Instagram: “I want to clarify to all the fans who read work written by pseudo-journalists in ‘serious’ newspapers, which write or give instructions to write without knowing or having a real idea of the facts, that my renewal will only take place when Inter make me a correct and concrete offer.

“Only after that can we talk about my renewal with truth, while putting to one side the lies that have been spread.”

With Inter slipping out of the Champions League group stages by the finest of margins but sitting third in Serie A looking for an immediate return, keeping their captain and leading scorer is of the utmost priority. The Icardis know this and so a degree of posturing is expected.

Having finally claimed a spot in the Argentina side ahead of this year’s Copa América it is an important season in Icardi’s career and the striker will not want off field episodes to jeopardise that.