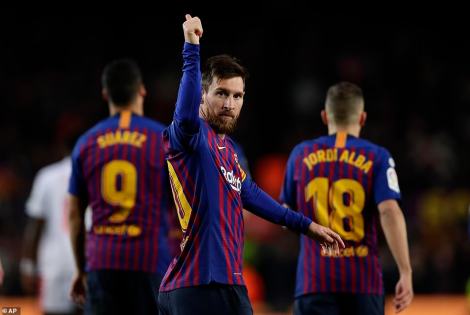 Another week and another milestone in the incredible career of Lionel Messi as the world’s best player scored his 400th La Liga goal in Barcelona’s victory over Eibar.

Luis Suárez had already tucked Barça ahead when Messi calmly doubled the lead and with the Uruguayan wrapping up the win, the Catalan club regained a five-point lead over Atlético Madrid at the top.

Despite this however, Messi stole the headlines. Already the all-time leading scorer in Spanish football, the Argentinian became the first player to score 400 in one of Europe’s top five leagues, coming in only 435 appearances. And while old rival Cristiano Ronaldo has scored 409 league goals across his spells in England, Spain and Italy, Messi has reached this milestone in 63 fewer games than the Juventus striker.

“Well I imagine he will [get to 500 goals]. 400 goals is just an incredible thing. It’s easy to say, but really you don’t know the reality of that until you try to score them,” Barcelona manager Ernesto Valverde said after the game.

“He’s an extraordinary player. He’s not only a goal scorer. He’s a born goal scorer but he also generates play, the assists, everything he gives the team in general.”

With nine La Liga titles already to his name, Messi is on course for a tenth with Barcelona out leading the way.

Real Madrid managed to not fall any further off the pace with a hard fought win over Real Betis but that didn’t prevent Giovani Lo Celso from shining.

The 22-year-old continues to impress in La Liga and chalked up another assist for Betis’ only goal with a wonderfully weighted through-ball for Sergio Canales. Full of creativity and industry, Lo Celso looks increasingly like the long term answer to Argentina’s midfield problems and makes Jorge Sampaoli’s decision not to utilise the former Rosario Central playmaker all the more baffling.

Meanwhile in Italy two more important parts of the new look Albiceleste were on target as Mauro Icardi and Lautaro Martínez found the net in a Coppa Italia rout over Benevento.

Played behind closed doors due to the racist chants aimed at Napoli defender Kalidou Koulibaly, Inter raced into a commanding lead with Icardi putting his contract disagreements behind him to lead the way.

The Inter captain slotted in a third-minute penalty before crashing a header against the woodwork that allowed Antonio Candreva to double the lead from the rebound.

Dalbert blasted in a third before half time and Martínez added a second half brace with two instinctive penalty box finishes either side of Roberto Insigne pulling a goal back. Filippo Bandinelli would again reduce the deficit only for Candreva to complete a brace of his own and complete a 6-2 thrashing.