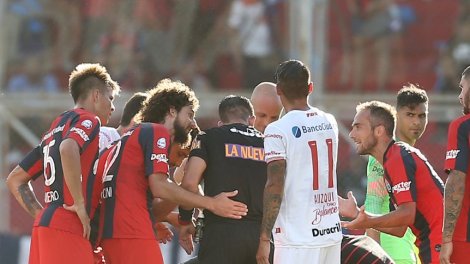 Jorge Almirón is still waiting for a first win as San Lorenzo manager but after a busy transfer window there are signs of improvement and despite having Fabricio Coloccini sent off during the first half of the rescheduled clásico against Huracán, El Ciclón still deserved at least a point.

Had this fixture taken place as originally planned instead of another victim of the Copa Libertadores final farce in November, Huracán would likely have been firm favourites. Gustavo Alfaro had guided El Globo into the top four but quit the club during the summer break to be replaced by Antonio Mohamed while across the divide, Jorge Almirón had his first transfer window as San Lorenzo boss and an opportunity to mold his side.

Goalkeeper Marcos Díaz’s replacement Antony Silva tipping one of those Blandi headers over and at the other end Monetti scrambling a Lucas Barrios point-blank effort off the line kept the scores level before the game swung in favour of Huracán. Fabricio Coloccini twisted away from a challenge from Israel Damonte on halfway and in doing so planted a boot inadvertently into the Huracán midfielder’s chest prompting referee Andrés Merlo to produce a red card.

With an hour still remaining Huracán would have fancied their chances but it was San Lorenzo with the fit again Fernando Belluschi pulling the strings in midfield who carved the best chances. Rubén Botta shot tamely at Silva before the break and Blandi fired wide in the second half, both created by Belluschi as the home spurned the chance for the lead.

As the final whistle drew closer Huracán posed a greater threat but aside from a correctly disallowed Andrés Chávez goal for offside, Mohamed’s side couldn’t come close to a winner.