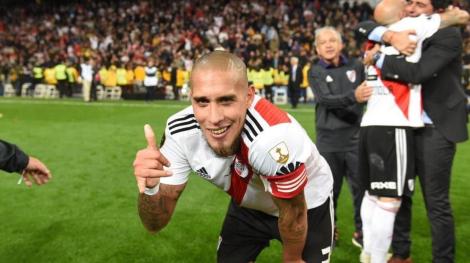 A strange mix of emotions filled the stands on Saturday night at El Monumental as Jonatan Maidana walked out alone on to the pitch for one final time- sadness, gratitude, and nostalgia were three of the most prevalent ones. River’s great centre-back came out not to play against Defensa y Justicia, but to receive an ovation and gift from the club before heading straight off to Mexico to join his new club Toluca.

This transfer nearly happened a year ago, but given the Mexicans came in at short notice Maidana opted to stay in Buenos Aires in order not to leave his coach in a tricky situation just hours before the transfer window closed. How often do we get to write that sentence about a modern footballer in today’s multi-billion dollar industry where contracts are thrown away as if they were yesterday’s newspaper?

When another fans’ favourite Pity Martinez departed in December, supporters sent him off in jubilant mood, remembering his collection of crucial and iconic goals in Superclasicos vs Boca Juniors.

Maidana’s case is slightly different however. He is even closer to River fans’ hearts for he wore the red and white shirt not just for the glory-filled years of 2014-2018 like Pity did, but also the dark days of 2011-12.

Eight and a half years the defender spent with River, and they were not eight and a half ordinary years. They were the biggest rollercoaster the club has ever seen.

Nobody needs reminding what the year 2011 signifies for River- the club’s humiliating relegation to the second division for the first time ever. Maidana was there when the club hit rock bottom that winter afternoon, and played a full part in the season in the B Nacional.

Out of darkness cometh light, as they say. Once the club were able to bounce back in 2012, they steadied themselves for a year or two before embarking on their most glorious decade ever.

Maidana can very much be considered the man who led the charge, not from the front, but from the back. During his time at River, he had almost a dozen different central defensive partnerships that ranged from average to superb. 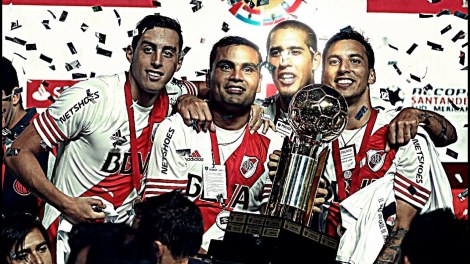 Fans will never forget the back four he formed with Ramiro Funes Mori, Lionel Vangoni, and Gabriel Mercado, ahead of Marcelo Barovero in goal. This was the feared defensive line that led the club to the 2015 Copa Libertadores title conceding just two goals in the entire knockout stage.

As is customary in Argentine football, that successful team quickly disintegrated with stars departing to sign lucrative contracts in Europe and Mexico. At the start of 2018, Maidana was the only member of that defence left at the club.

Over time, manager Marcelo Gallardo built another impressive back four in front of Franco Armani, with Maidana again at the heart of it. In December 2018 he went on to lift the Copa Libertadores for a second time in four years, this time as captain for most of the historic final vs Boca Juniors. He won 11 honours at the club in total.

When future generations pour over this fascinating period of River Plate history, Maidana will be looked upon as a constant in an ever-changing world. As the Argentine game’s financial inferiority created a constant exodus of talent, he stayed put in Núñez, immovable, unflinching. His attitude to off the pitch matters seemed to reflect his attitude on the pitch. For many supporters, the intimidating centre-back is the man who best embodied the resilience and winning mentality that Gallardo has instilled in this team.

In footballing terms, Maidana is certainly in the twilight of his career. He turns 34 this year and his lack of mobility was exposed a few times in key Libertadores clashes in recent months. His defensive partner Javier Pinola- two years his senior- had to cover for him a couple of times.

It is not an easy job trying to sum up what Maidana means to River fans. Threads online asking to summarize him in one word fill up with comments such as “leader”, “soldier”, “winner” or “unique”.

‘Unique’ is probably the most accurate word actually. Rarely has River, or any South American club, had a player who has been so reliable for so long. What the team now loses is not just a splendid defender on the field, but one of the group’s spiritual leaders in the dressing room. Maidana is a man who knows all about turning adversity into glory. The players left in the squad have experience of beating Brazilian teams on their own turf, or winning a final they were behind in three times, but Joni is a man who knew exactly what it meant to turn a second division team into continental champions while keeping a clean sheet for 180 minutes of the final.

Gallardo has faced many rebuilding operations in his four and a half years as River boss, but this one is entirely new. One of his two generals has gone, and that leaves Leo Ponzio as the only long-standing member of a squad that, like all others in Argentine football, is in a constant process of renewal.

What is perhaps most surprising about the Maidana story is that he was a Boca Juniors player once, and featured in their last Libertadores winning-side in 2007, meaning he has lifted the famous cup three times.

Many men have crossed the great Buenos Aires divide, but surely none will ever do so and leave the same legacy that the legendary Jonatan Maidana did at River Plate between 2010-2019.