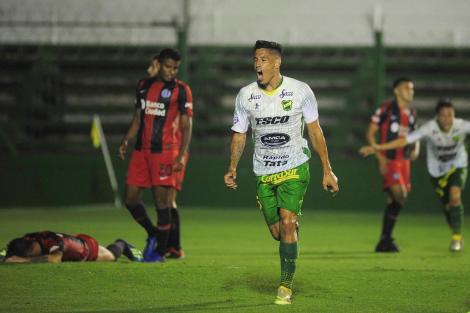 At some point Defensa y Justicia’s title challenge, however unlikely, must be taken seriously and after an unbeaten first half of the season, El Halcón have resumed this year with a victory over River Plate in El Monumental and on Friday evening a win against San Lorenzo to go level on points with Racing Club at the top.

Sebastián Beccacece and his young side have rightly received plaudits for their defensive discipline and dynamism in attack but against San Lorenzo, the Superliga underdogs demonstrated another valuable quality – a mentality that never accepted only a point and that ultimately battled to a stoppage time win.

A fairly uneventful opening 45 minutes saw San Lorenzo threaten at the Estadio Norberto Tomaghello but the visitors were grateful to referee Nicolás Lamolina who inexplicably failed to punish Gonzalo Rodríguez for the most blatant of shirt pulls on Lisandro Martínez.

In the knowledge that a point could see Racing extend their lead, Defensa y Justicia attacked with greater purpose after the break and substitute Fernando Márquez came close to making an immediate impact, heading against the angle of post and bar with Fernando Monetti stranded.

Gastón Togni was the next to go close and after Gustavo Torres snatched at a chance to win it at the other end, the home side finally broke the deadlock in added time. Youngster Ignacio Aliseda rolled the ball to Márquez and on his return to the club from a brief spell in Malaysia, Cuqui side footed past Monetti.

The San Lorenzo keeper was sent off moments later for an altercation with a ball-boy leaving defender Rodríguez to finish the game in goal but it made little difference.

Jorge Almirón’s wait for a first win as San Lorenzo manager goes on while for Defensa y Justicia the dream continues. Victory puts unbeaten El Halcón on 36 points and so Racing will need at least a point from their trip to Aldosivi on Saturday to reclaim top spot outright.

In Mendoza, Lanús’ revival under Luis Zubeldía continued as El Granate chalked up an impressive 2-0 win over Godoy Cruz.

The home side under new manager Marcelo Gómez had started brightly and leading scorer Santiago García should have done better when attempting to punish Matías Ibáñez’s poor clearance but it was Lanús who scored first. Nicolás Pasquini’s left wing cross found Tomás Belmonte’s well timed run and the young midfielder found the net with a diving header.

And it got even better for the visitors before the break. Lautaro Acosta, enjoying himself up front with José Sand once again, pounced on some hesitant defending and with one clever flick left two in his wake to slot the ball past Roberto Ramírez.

There was little response from Godoy Cruz and restricted to long range efforts, Lanús were able to hold on for a valuable three points.

Juan Alvarez provided a dream start with less than five minutes on the clock as Banfield dominated the early stages. Several chances came and went as relegation threatened San Martín managed to hold on. That persistence was rewarded after 77 minutes when Banfield goalkeeper Mauricio Arboleda flapped at a cross and left Pablo Palacios with the simplest of headers.

Banfield thought they had snatched the points late on only for the tightest of offside decisions to rule out Emanuel Cecchini’s tap in.