The two-horse race at the top gets more intriguing with each passing week and as the top two secured victories, there were also good wins for Boca Juniors and River Plate. Meanwhile matters at the foot of the promedio also got interesting after dramatic changes in form breathed life into a couple of survival bids and caused concern among others.

Just like last week, Defensa y Justicia secured a dramatic late win to move level on points with Racing Club at the top of the Superliga only for La Academia to respond with victory later in the weekend. Sebastián Beccacece’s unbeaten side appeared to be heading to a first defeat of the season away to San Martín in Tucumán only to be thrown an own-goal lifeline in the 81st minute and for Nicolás Fernández to score a stoppage time winner sparking wild celebrations.

The pressure was then on Racing and Eduardo Coudet got the response he desired. Jonathan Cristaldo, Lisandro López and Leonardo Sigali scored the goals to secure a 3-1 win over Huracán and with it restore their three-point lead.

With Atlético Tucumán suffering defeat to Patronato, Boca Juniors jumped into third after a hard fought win over Godoy Cruz in La Bombonera. A Darío Benedetto penalty and late Mauro Zárate free-kick were just enough to see off El Tomba and make it back-to-back wins for Gustavo Alfaro, who is gradually finding his strongest eleven – which no surprises doesn’t include Carlos Tevez.

Those results meant Vélez Sarsfield could have edged closer to those Copa Libertadores spots but El Fortín’s 14-game unbeaten run in Liniers came to an end thanks to a rejuvenated River Plate. The Copa Libertadores champions win in midweek over Godoy Cruz brought to an end a run of three consecutive home defeats and River followed it up with a 2-1 win over Vélez. Franco Armani saved a first penalty before goals from Rafael Santos Borré and Juan Fernando Quintero wrapped up the points.

Buenos Aires’ other two grandes met at the Nuevo Gasómetro on Saturday but the goalless draw between San Lorenzo and Independiente was one of four stalemates over the weekend.

In the relegation battle, Patronato put three past Atlético Tucumán a week after winning at the Monumental, and for a couple of hours jumped out of the bottom four. However, San Martín de San Juan reacted in equal measure beating Estudiantes by the same margin.

The revival of these two is particularly bad news for Belgrano and Argentinos Juniors who battled to a dull, nil-nil in La Paternal and look increasingly like two sides primed to slip into the B Nacional. 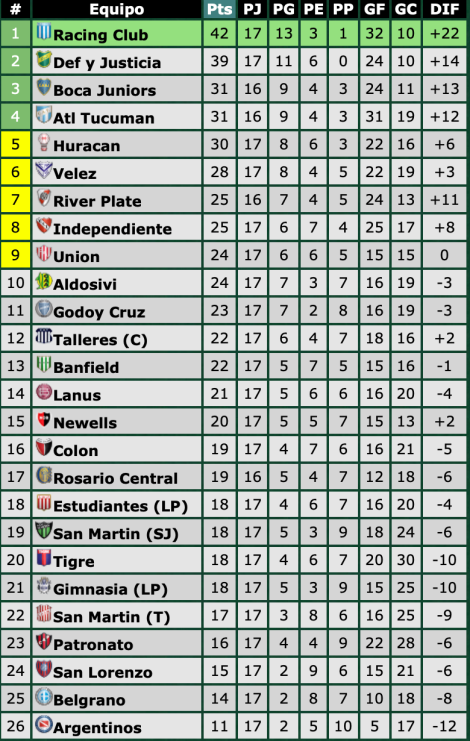