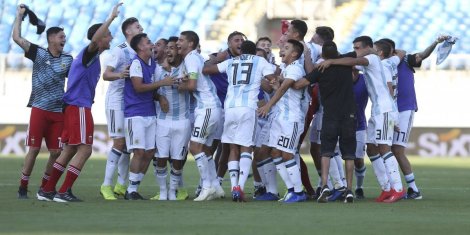 After a slow start to the tournament, Argentina under-20s have gradually gathered momentum and victory over Uruguay on Thursday not only booked a place in this year’s World Cup but left Fernando Batista’s side on the brink of the title ahead of Sunday’s final showdown with Brazil.

An unconvincing qualification for the final round and then defeat to Ecuador suggested Argentina faced a battle to bag one of the spots in Poland in May but three consecutive victories later and the Albiceleste could be crowned Sudamericano champions on Sunday without kicking a ball.

Thursday’s clash with Uruguay pitted first against second and ahead of Sunday’s final round of fixtures it was a potential title decider.

As tight as would be expected in the early stages, the deadlock was broken midway through the first half in spectacular fashion – Newell’s Old Boys’ impressive midfielder Aníbal Moreno thundering a shot into the top corner from 30 yards.

Uruguay were unable to carve out any clear opportunities but the meeting between the two Rioplatense rivals was far better than the scrappy affair that Argentina edged in the previous round.

On that occasion it was settled by a Gonzalo Maroni wonder strike and once more the 19-year-old playmaker was decisive. Maroni’s second goal of the tournament was certainly not as aesthetically pleasing as the first but poking the ball into the net at the second attempt 20 seconds after the break put Argentina in the driving seat.

A red card to Talleres’ Facundo Medina with 20 minutes remaining provided Uruguay with a glimmer of hope but it took until stoppage time for Nicolás Schiappacasse to score what was to be just a consolation.

Uruguay play Colombia on Sunday afternoon before Ecuador face Venezuela and at least one will need a win to force Argentina to get a result against Brazil in the final game. While Brazil have undoubtedly been the worst side in the final stage, the Albiceleste can’t afford to lose focus.