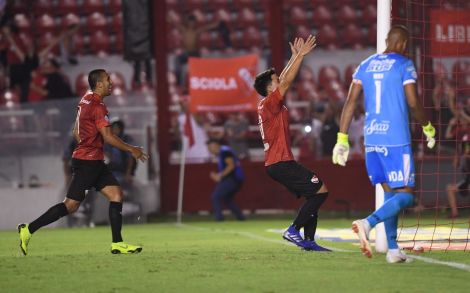 After five games without a win Independiente were in need of a lift and while the performance was hardly vintage, El Rojo secured the points against Unión thanks to Fernando Gaibor’s second half penalty.

Handing a start to new signing Cecilio Domínguez, the Paraguayan produced a promising debut, which following various player sales and frustration in the market will have pleased manager Ariel Holan and the Avellaneda faithful. The pace of Domínguez was clear when the 24-year-old raced in behind to flash a shot across the face of goal and while it looked as though the breakthrough was coming for Independiente, it was instead the visitors who led.

Bruno Pittón didn’t know too much about it as Fabricio Bustos cleared the ball into the Unión midfielder’s face only to see the ball ricochet past Martín Campaña but the visitors gladly accepted their good fortune.

That didn’t last long however. Gonzalo Verón and Bustos combined well down the right and the full-back’s low cross was diverted into his own net by Yeimar Gómez Andrade to bring El Rojo level.

With the game in the balance and Independiente desperate for a win it was the home side pushing forward in search of a winner and Domínguez proved vital. The debutant’s through-ball found substitute Pablo Hernández and just beating Nereo Fernández to it, the goalkeeper’s lunge brought the midfielder down. Fernando Gaibor stepped up and sending the 39-year-old the wrong way sealed it for El Rojo.

Back in La Plata after what seems like an age, Estudiantes picked up a first win in eight and in doing so delivered a wake-up call to Patronato.

The visitors had started the year in tremendous form with victories over River Plate and Atlético Tucumán, scoring six in the process, but just as an unlikely relegation escape looked on the cards, Rubén Forestello’s side were brought back to reality.

Estudiantes had already come close on a number of occasions when Jonathan Schunke headed in at a corner after 25 minutes. El Pincha should have extended that lead when Nahuel Estévez, guilty of missing one of the clearer opportunities earlier, saw a penalty saved by Sebastián Bértoli.

Patronato’s hopes of a comeback were short-lived though as Federico Bravo almost decapitated Rodrigo Braña and was deservedly sent off before half time. With the man disadvantage, the visitors actually looked more dangerous after the break and as Estudiantes couldn’t add to Schunke’s goal, the chance of nicking a point remained until the end.

That equaliser didn’t materialise and so Patronato remain in the relegation zone hoping that Belgrano and San Martín de San Juan don’t take the opportunity to open up more of a gap to safety.

Four days after their sensational Copa Libertadores victory over São Paulo and only three more until a trip to Morumbi to try and finish the job, Talleres were back in Superliga action managing to pick up a point away to Atlético Tucumán.

Almost an entire second string Talleres were still a threat and the lively Diego Valoyes perhaps should have given the visitors an early lead. Atlético gradually came into the game but failed to work 40-year-old goalkeeper Mauricio Caranta and so the two sides shared the points. Atlético remain third overnight but clearly missing Luis Rodríguez it may be difficult to remain in those Copa Libertadores spots while for Talleres all focus is on São Paulo.