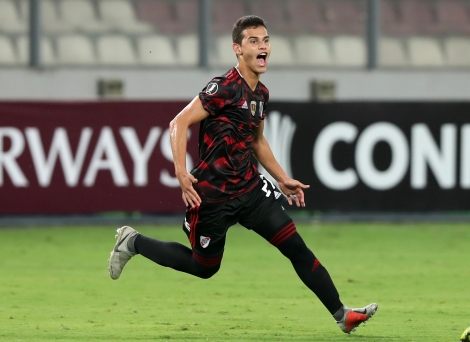 Champions River Plate began their Copa Libertadores defence in Peru but needed a 95th minute free-kick from youngster Cristian Ferreira to earn a point away to Alianza Lima.

It was far from an impressive display from River but a result that should ultimately be viewed as a positive. José Manzaneda’s close range finish past Franco Armani gave Alianza Lima a first half lead and when Rafael Santos Borré saw an 80th penalty saved by Pedro Gallese it appeared Marcelo Gallardo’s side would be starting their campaign with defeat.

However, deep in stoppage time substitute Ferreira furthered his burgeoning reputation with a superb free-kick that Gallese couldn’t keep out.

Lima will prove a tricky away day for any side and so River will return to the Monumental next week to face Palestino confident that they can claim an opening win.

Meanwhile, Rosario Central put their struggling domestic form behind them to draw with 2017 winners Grêmio in their Group H opener. Fernando Zampedri headed El Canalla in front within two minutes but the lead didn’t last long as Everton slotted in an equaliser.

For all their troubles in the league new manager Paulo Ferrari will have been pleased by his side’s display and grateful to see Jean Pyerre’s stoppage time free-kick hit the crossbar. A trip to Chile to play Universidad Católica lies ahead for Central.