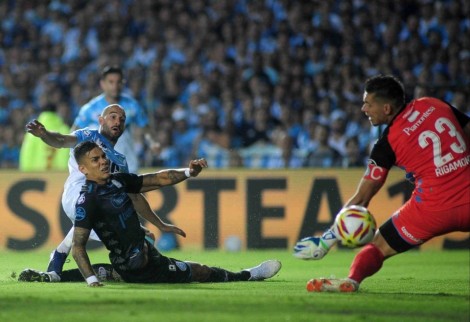 Everything still depends on Defensa y Justicia but after El Halcón had their appeal to play simultaneously with Racing Club rejected, La Academia’s victory over Belgrano on Saturday evening meant Racing pull clear once more at the top.

Captain Lisandro López poking in the game’s only goal in the opening minute proved enough for the Superliga leaders and while Belgrano battled admirably after the break, El Pirata’s failure to find the net was costly.

The second half was a nervy affair for Racing and should arguably have been a little more relaxed after an opening 45 minutes that saw the home side threaten from a number of set-pieces after López’s opener – the closest being Alejandro Donatti’s header against the crossbar.

There was an improvement from Belgrano but as has been the case so often during their run-in, Diego Osella’s side couldn’t convert and with defeat, El Pirata remain in the relegation zone with two games remaining.

Belgrano pray that Patronato don’t find a result against Defensa y Justicia on Sunday morning while Racing hope for the opposite, the only remaining challengers to the title trail by four points and anything other than victory would hand La Academia a huge advantage.

Belgrano were also hoping to see San Martín de San Juan lose and Argentinos Juniors obliged with a 3-2 victory on the road, a result that in turn ensured Los Bichos would remain in the Superliga.

That perhaps didn’t look likely when Juan Mattia nodded San Martín into a very early lead but Argentinos have started to find the net with a little more consistency in recent weeks and after half an hour were level. Alexis Mac Allister had already seen one goal chalked out for offside when the Brighton-bound midfielder arrived in the box to fire the equaliser.

It got better for Argentinos with Damián Battallini heading a second and soon after Mac Allister racing in behind to clip the ball over the onrushing Luis Ardente for number three.

Martín Bravo managed to pull one back for San Martín but didn’t quite spark the grandstand finish the home supporters had hoped for. Defeat leaves Rubén Forestello’s side in the drop zone scraping with Belgrano and Patronato over what is likely one safe spot.

At the other end of the table, Atlético Tucumán were aiming to make up for last week’s defeat to River Plate and overtake the Millonarios back into the fourth and final Copa Libertadores spot but instead were dealt a heavy blow by Vélez Sarsfield.

Gabriel Heinze’s dip in form had seen their own Libertadores hopes vanish yet a rediscovered touch in front of goal saw El Fortín claim a valuable 2-0 win in Liniers. Both sides had created chances when Agustín Bouzat eventually put Vélez in front just before the break and with Atlético unable to find an equaliser it was left to Pablo Galdames to tap in a late second.

Atlético could be three points behind River on Sunday should Marcelo Gallardo’s side beat Independiente while Vélez two points further back have at the very least looked to have secured Copa Sudamericana football for 2020.

Unión have boosted their hopes for a Sudamericana spot too while damaging Lanús’ with a convincing 3-0 win in Santa Fe.

Franco Troyansky’s brace inside the opening quarter of an hour left a sub-par Lanús with far too much to do and instead a defensive blunder allowed Diego Zabala to add a third just after the break.