The title race might be over but the relegation battle is going to the wire and while already relegated San Martín de Tucumán earned a point against Estudiantes they remain the only side confirmed to be playing in the B Nacional next season. San Martín de San Juan, one of four teams fighting for the one remaining place in the Superliga, managed a draw away to Colón and as such are two points from safety.

It may yet prove a valuable point ahed of the final weekend and perhaps could have been worse were it not for a point blank save by Luis Ardente to deny Marcelo Estigarribia late on. San Martín had posed enough of a threat of their own to deserve a point but will now be hoping Patronato fail to beat Argentinos Juniors on Sunday while they need a win against Talleres.

Earlier in La Plata, San Martín de Tucumán took a point from their last away game in the Superliga for a while. The Ciruja were relegated a couple of weeks ago but still put in a good performance to battle back with ten men to earn a draw.

Gabi Milito was hoping to continue his positive start as Estudiantes boss and his side were much the better team in the opening 45 minutes. Unable to find a breakthrough, El Pincha were given a helping hand when Adrián Arregui was shown a second yellow card almost immediately after the restart and from the resulting free-kick Jonathan Schunke hooked in the opener.

The lead didn’t last long though and after a free-kick had caused panic in the Estudiantes penalty area Gonzalo Rodríguez rifled in the equaliser.

While that result had little bearing on the Superliga, the four fixtures at 3:15 on Sunday will decide who joins San Martín de Tucumán in the B Nacional and who survives. 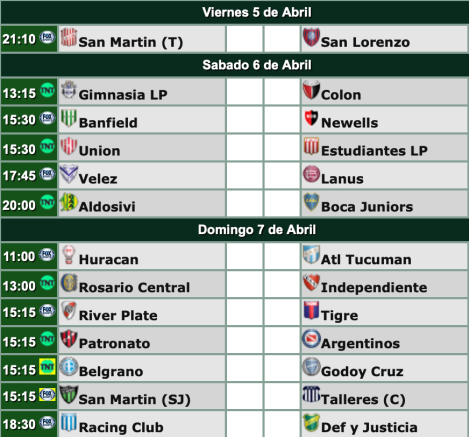