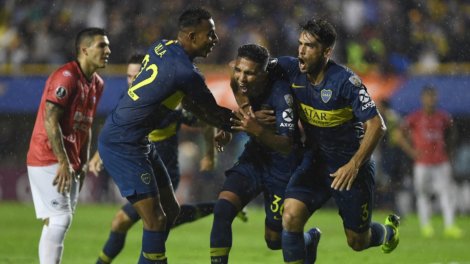 The heavy defeat away to Athletico Paranaense last week served as a wake-up call to Boca Juniors but back at La Bombonera, Gustavo Alfaro’s side swept past Jorge Wilstermann in the rain to look far more comfortable in Group G.

While problems may remain on the road, Boca followed up the 3-0 win over Deportes Tolima at La Bombonera with an even more emphatic 4-0 victory on Wednesday evening and and could seal a place in the last 16 with a win in Colombia in two weeks.

The Peruvians frustrated Boca to a goalless draw when the sides met on match day one in Cochabamba and looked as though they might do again when Arnaldo Giménez saved a Darío Benedetto penalty on the half hour mark. That however, was only a reprieve for the visitors as Emanuel Reynoso headed Boca in front from close range minutes later.

Having missed one already, Benedetto would get a second chance after Carlos Tevez was adjudged to have been fouled in the penalty area and on this occasion, the Boca number nine emphatically thrashed the ball into the net.

Mauro Zárate replaced Tevez with 20 minutes to go and in the closing stages gave a good example of why he should be in Gustavo Alfaro’s starting eleven, racing clear to check back inside a defender and lofting the ball over the stranded goalkeeper from 25 yards out.

There was even time for Zárate to head what looked like his second but in fact may have been given as an own goal against Alex Silva.

Boca climb into second after Athletico defeated Deportes Tolima on Tuesday and while the Brazilians are favourites for top spot, Boca’s trip to Ibagué on April 24th could decide who joins them.

It was less positive for Huracán and Rosario Central, who both suffered one-sided defeats on the road that leave them staring at early exits from this year’s tournament.

Veteran striker Fred’s looping header broke the deadlock and opened the floodgates that saw Cruzeiro blast away Huracán in the opening 45 minutes.

The visitors came within a whisker of a swift equaliser but were undone by their defensive frailties as Fred tapped in a second and then completed his hat-trick with barely half an hour on the clock.

A fabulous curling effort from full-back Dodô wrapped up the win for Cruzeiro, who having won all four games have cruised into the last 16 with minimum fuss. Deportivo Lara could put Huracán out when they face Emelec on Thursday but regardless of results elsewhere the chances of El Globo turning their form around to win their final two games look slim.

Rosario Central are also effectively out after defeat to Grêmio but don’t appear to be too bothered having left a number of their starting eleven back in Rosario for the trip to Porto Alegre.

A distinctly second string side put out by Diego Cocca were immediately under pressure from an out-of-form Grêmio side themselves scrapping for survival in the tournament and after coming close on a couple of occasions it was no surprise to see Everton eventually fashion the opener. The 23-year-old gave Nahuel Molina a difficult evening and cut back onto his right foot to deliver the cross for Jean Pyerre to apply the simplest of finishes.

Central were able to hold out until the 55th minute when Jean Pyerre turned provided and cut the ball back for Leonardo Gomes to tap in the second. The full-back rifled in his second from the edge of the box and while Jonás Aguirre was able to salvage a late consolation for Central there was little argument over which side deserved the points.

Although mathematically still possible to progress, Central seem resigned to their elimination already and are focused on the Copa de la Superliga and the upcoming Supercopa against Boca.