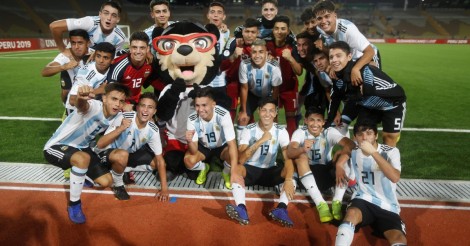 With victory over Chile on Monday, Argentina under-17s were virtually certain of a place at the World Cup but the Sudamericano title was also in their own hands with just two games to go. A Paraguay side, themselves still in with a shot at the title, were next up but proved no match for Pablo Aimar’s team as a 3-0 victory in Lima not only secured a spot at the World Cup but meant a win over Ecuador on Sunday would capture the trophy.

Boca midfielder Cristian Medina would double the lead from the penalty spot shortly before the break after club teammate Zeballos would prove to be the catalyst once more.

Only a second half collapse would deny Argentina and Aimar’s side have demonstrated their resolve throughout this tournament. With the clock ticking down, La Albiceleste would counter and two second half substitutes combine to seal the victory, Matías Godoy running clear to square the ball for Independiente’s Alan Velasco to tap in a third.

Only bottom of the group Ecuador lie between Argentina and the title. World Cup qualification was celebrated on Thursday but Aimar and his side will be lifting the trophy on Sunday evening provided they can obtain another three points.