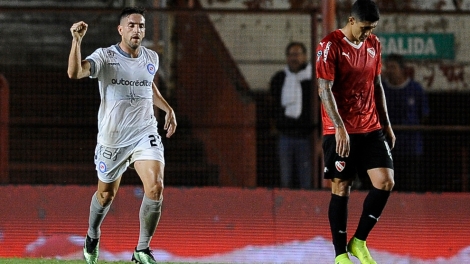 Independiente will need to come from behind if they are to progress in the Copa de la Superliga after suffering a 3-2 first leg defeat against Argentinos Juniors on Sunday.

The two away goals give Ariel Holan’s side some consolation ahead of next week’s second leg in Avellaneda but El Rojo will need to be much better if they are to avoid a damaging cup exit to an Argentinos side that finished bottom of the Superliga.

In La Paternal on Sunday evening, Argentinos Juniors looked the far brighter but after testing Independiente goalkeeper Martín Campaña on a couple of occasions found themselves behind midway through the first half. A defensive lapse by Miguel Torrén, who was lucky to avoid sanction later on for an off the ball knee in the back of Cecilio Domínguez, allowed Pablo Pérez through on goal and although Lucas Chaves denied his first effort, the midfielder worked the ball to Silvio Romero, got the return and then blasted into a virtually unguarded net.

Silvio Romero wasted a glorious chance to double the lead, an advantage that Independiente scarcely deserved, and soon after Argentinos were level. Damián Batallini pinched possession and crossed from the right for former Racing striker Gabriel Hauche to bundle the ball in from close range – a goal made doubly worse for El Rojo with Fabricio Bustos injuring his ankle in an attempt to cut out the cross.

Soon after the break Claudio Spinelli nodded the home side in front and when Hauche drilled in his second eight minutes from time, Independiente looked in serious trouble.

However, Cecilio Domínguez finishing off a well worked move reduced the dificit and leaves El Rojo with a far more achievable comeback next week.

The winners of that tie between Independiente and Argentinos Juniors will face the winners of Sunday’s clásico and while San Lorenzo versus Huracán may have been the fixture that leapt of the page when the Copa de la Superliga was set, the reality was a tiresome draw.

As is often the case in these derbies, not losing takes priority over winning and while San Lorenzo were the better side during the opening 45 minutes there was a distinct lack of clear chances. Huracán improved after the break but only really tested Fernando Monetti from range and even when El Globo were reduced to ten men following a second yellow card to Lucas Merolla, San Lorenzo failed to craete much.

The rivals head to the Estadio Tomás Adolfo Ducó on Friday to resolve the tie but another nervy encounter is expected.

Earlier in La Plata, Banfield took a step towards setting up a last 16 tie with champions Racing Club after securing a 1-0 win over Estudiantes.

18-year-old centre forward Julián Carranza poking in a rebound on the half hour mark was enough and yet Banfield might feel they could have taken a greater advantage back to the Florencio Sola. Jesús Dátolo struck the upright from a second half free kick and youngster Agustín Urzi hit the post when through on goal.

Old teammates Gabi Milito and Hernán Crespo will look horns in the dugout again on Friday evening but it’s advantage Crespo at the half way mark.