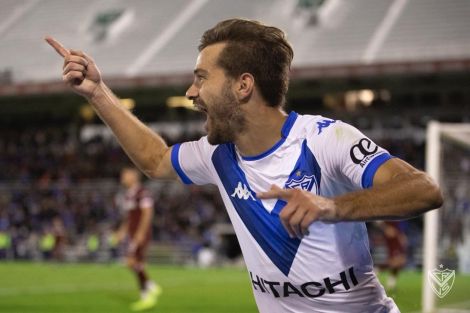 All eyes will be on Mauro Zárate in the next round of the Copa Superliga as the Boca forward returns to Liniers following his acrimonious departure from Vélez last year. While Zárate added the gloss on a comfortable Boca win on Sunday evening, Vélez secured their place in the next round with a 4-1 aggregate victory against Lanús.

With a 2-1 lead from the first leg, Vélez were already in the driving seat so when a long pass downfield from Agustín Bouzat allowed Leandro Fernández a clean run on goal to slot in the opener after 12 minutes, the tie appeared almost settled. That’s not to say that Lanús didn’t have their chances with Lautaro Acosta most culpable for a glaring miss when still only a goal down.

That wastefulness proved costly just before the break as Lucas Robertone slipped in Bouzat and the hugely improved forward clipped the ball past Matías Ibáñez for a second.

In need of three unanswered goals, Lanús started the second half brightly and defender Lautaro Valenti drew a good save from Lucas Hoyos before the visitors were given a further boost by Robertone being shown a second yellow card for a reckless challenge on Facundo Quignón.

Pushing forward with the numerical advantage, Quignón should have pulled a goal back with an unmarked diving header from close range as Lanús were unable to find a way through.

Marcelo Gallardo named his River Plate, rivals Boca, Superliga champions Racing and Vélez as the main contenders for the Copa title and in the next round two of those face off. Vélez certainly shouldn’t be counted out and Zárate will be in for a special welcome from the supporters who once idolised him.