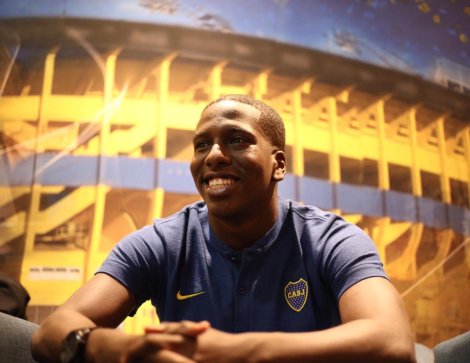 It has been one of the transfer sagas of the window so far but on Thursday afternoon Boca Juniors finally closed the deal for Gimnasia’s Venezuelan striker Jan Hurtado.

Following weeks of talks and rivals offers from elsewhere, the 19-year-old signed a contract until 2023 at La Bombonera and becomes Gustavo Alfaro’s second reinforcement after midfielder Alexis Mac Allister.

Hurtado completed his medical earlier in the week only for Gimnasia to accept a higher offer from Genoa and cast doubt on the move. But after further talks the player and his agent confirmed that it was only Boca that was now of any interest and the move would be finalised.

Boca eventually paid around $5 million for the striker with $3.8 million going to Gimnasia for the 50% that the La Plata club owned and the remainder going to Hurtado, his agent and former club Deportivo Táchira.

The desire of Hurtado to join Boca appeared to be the deciding factor ultimately and the Venezuelan said all the right things to get supporters on side after putting pen to paper.

“I followed Boca from Venezuela and dreamed of playing in the Bombonera,” Hurtado told the official website.

A long-term deal with a $20 million release clause is an indication of Hurtado’s potential and after dazzling for Venezuela’s under-20s, the powerful forward looks set to take the next step in his career bolstering Alfaro’s squad for another Copa Libertadores challenge.

For those that witnessed Hurtado’s raw power and pace that at times made him unplayable during the under-20 South American Championships it is little surprise to see the Venezuelan complete such a high-profile move but Hurtado is yet to produce that type of performance at club level in anything more than flashes.

A goal against Boca in the Copa Argentina as Gimnasia booked their place in the final last year served to draw the club’s attention but eight senior goals in 44 matches between Táchira and Gimnasia shows there is plenty of room for development.

In Hurtado’s defence many of those performances came as a substitute, unable to really cement a starting a role in La Plata until the very tail-end of the season, and a squad role at La Bombonera is likely.

Interest in Darío Benedetto could see competition reduced but the physical characteristics of Ramón Ábila would make Wanchope the more logical rival for a starting position as things stand.

With less than two weeks until the start of the season and the last 16 Copa Libertadores tie with Athletico Paranaense likewise just around the corner, Boca remain active in the market. Mac Allister and Hurtado two impressive youthful additions but not the marquee star that supporters are waiting for.