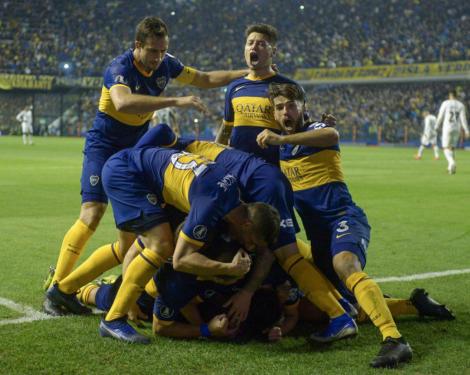 It was a mixed night for Argentine clubs in the Copa Libertadores on Wednesday evening as Boca Juniors secured a place in the quarter-finals with victory over Athletico Paranaense while San Lorenzo saw their hopes dashed as Cerro Porteño come from behind to claim a 2-1 win.

Alexis Mac Allister’s strike had given Boca a first leg lead over Athletico and so aside from Carlos Izquierdoz returning from suspension, Gustavo Alfaro named an unchanged side to finish the job.

A thoroughly underwhelming Athletico were outclassed in La Bombonera and were it not for some wasteful Boca finishing the tie would have been over sooner. Ramón Ábila and Nahitan Nández both spurned glorious opportunities during the first half in which the Brazilians struggled to create anything of note in their search for a vital goal.

The sense that Boca could rue those misses hung in the air until the 57th minute when Ábila made space and lashed the ball past Santos in the Athletico goal to settle those nerves.

Now in need of two Athletico looked all but out and all that was really left was for Nahitan Nández to experience the warmth of the Bombonera crowd one last time. The Uruguayan is set to complete his transfer to Cagliari and his substitution fifteen minutes from time drew the 23-year-old to tears.

His replacement Eduardo Salvio added a second in stoppage time cutting inside to beat Santos at his near post and with it Boca were comfortably into the quarter-final. Liga de Quito are up next for Los Xeneizes but the prospect of a Superclásico semi-final already looms uncomfortably on the horizon.

San Lorenzo’s presence at this stage of the Copa Libertadores was already something of a surprise and yet there will be a feeling that Juan Antonio Pizzi’s side could perhaps have extended their stay with a result in Asunción.

Goalless from the first leg in Bajo Flores, San Lorenzo got the breakthrough early at the Estadio General Pablo Rojas when Héctor Fértoli was tripped on the edge of the box, initially winning a free-kick before seeing referee Wilmar Roldán point to the spot thanks to a VAR review. Adam Bareiro slotted in his first goal for the club and with it San Lorenzo left their hosts needing two.

San Lorenzo could have perhaps added a second of their own before the break with Lucas Menossi agonisingly close to slotting in from Fernando Belluschi’s cut-back but Cerro Porteño reacted superbly after the break.

A Bruno Pittón foul on substitute Óscar Ruiz handed the home side a penalty and Argentine striker Joaquín Larrivey levelled things up and almost before San Lorenzo could regroup they found themselves behind. A wonderful lofted pass by Federico Carizzo cut open Juan Antonio Pizzi’s defence and Ruiz nodded Cerro Porteño in front.

Unable to muster an equaliser, San Lorenzo limped out now looking to improve matters domestically while Cerro Porteño go on to face River Plate in the quarter-final.