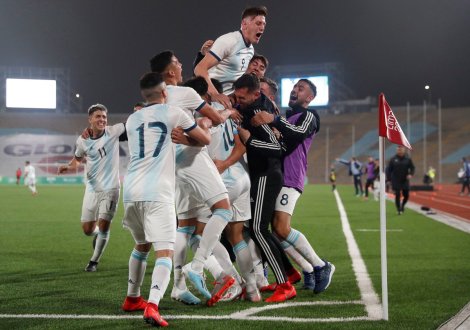 It ended in heartbreak for Argentina’s women a day earlier but Fernando Batista’s under-23s captured Panamerican Games gold on Saturday evening thanks to a three-goal second half blitz that fired La Albiceleste past Honduras.

A defensive error as Honduras attempted to play out from the back gave Argentina a dream start as Banfield’s in-demand winger Agustín Urzi pounced to win possession and fired the ball into the bottom corner after seven minutes.

Firm favourites to be crowned champions after their semi-final win over Uruguay and ahead early, Argentina were in control but it was far from plain sailing.

Honduras equalised shortly before the break, Facundo Cambeses saving an initial shot by Elison Rivas only for Douglas Martínez to follow in the rebound.

Things got worse for Argentina when goalscorer Urzi was forced off early in the second half with a shoulder injury but Carlos Valenzuela’s 58th minute goal sparked a remarkable eight-minute spell that blew Honduras away.

Santiago Colombatto cut the ball back for Valenzuela to sweep in the second and almost immediately after, Urzi’s replacement, Lucas Necul doubled the advantage.

Argentina were cruising and swiftly killed the game with captain Fausto Vera rising to head in La Albiceleste’s fourth.

There will undoubtedly be greater tests ahead for Argentina and coach Fernando Batista but denied most of his first choice squad, La Albiceleste displayed a greater depth than was imagined and a terrific spirit.